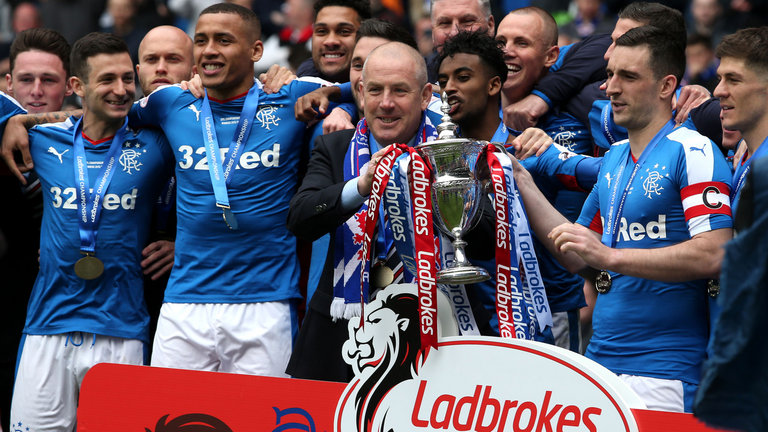 Four long years. 48 months. We have all aged almost half a decade waiting for Rangers to return to where they belong, and after the nightmare of the Brechin Hedge, the motorways next to various third and second division part time clubs, and drawing at home to Dumbarton, Rangers finally take their place back in the Scottish Premiership.

This has been a long road, a long and hard road.

It has seen fan splits, club splits, boardroom politics, reputations created, destroyed, social media battling, marches to Hampden, and an infinite number of other subplots which defined so much about the maelstrom Rangers and our fans experienced.

No football club in history has ever been through the hell Rangers fans have – I do spare a thought for Leeds United, who remain in the depths of the English lower leagues after their financial implosion of the early 00s. But there is something rather hellish and unique about the horror Rangers fans have tolerated for half a decade which makes the restoration to our place at the top of Scottish football quite, quite sweet and thoroughly deserved.

Only 14 months ago we were scraping the barrel of purgatory, after Cammy Bell had shipped the final insult at Fir Park in embarrassing style, to sum up where we were heading on the park.

Here we are now, a completely new squad, every last remnant of the diabolical lower league roster gone bar Lee Wallace and Kenny Miller (Barrie McKay barely counts such was his bit-partery), and in its place a hungry young side, with fast-flowing attacking football and a vision for the future steered by one of the most intelligent managers Scottish football has ever been blessed with in Mark Warburton.

It wells one up with pride to think how far we have come, and what we have been through to get to where we are now – the miserable losses against United, the saving of a point v Annan in the last minute by Bilel Mohsni…compared with now and facing off against Hamilton Accies on Saturday back in the SPL, where we belong.

The dichotomy is borderline lavish, and nearly mind bending, but endlessly satisfying.

And the change in personnel…! From one year ago and Kyle Hutton and Ian Black in midfield to Joey Barton and Niko Kranjcar. This upgrade goes beyond impalpable and straight up to staggering.

One year ago, last season’s substitute at Queen of the South Kyle Hutton (now a Buddy) was ruling Rangers’ midfield, while Ladbrokes’ finest Ian Black was being sent off from it.

Now we have England and Croatian internationalists Barton and Kranjcar respectively.

On Saturday these gentlemen and more take the field in Rangers’ shirts for the first time in the Scottish Premiership, as the Club returns to its proper home.

And we all stuck with them, every step of the way. We never left. We suffered through it all.

If this does not make you proud to be a Ranger, nothing ever will.