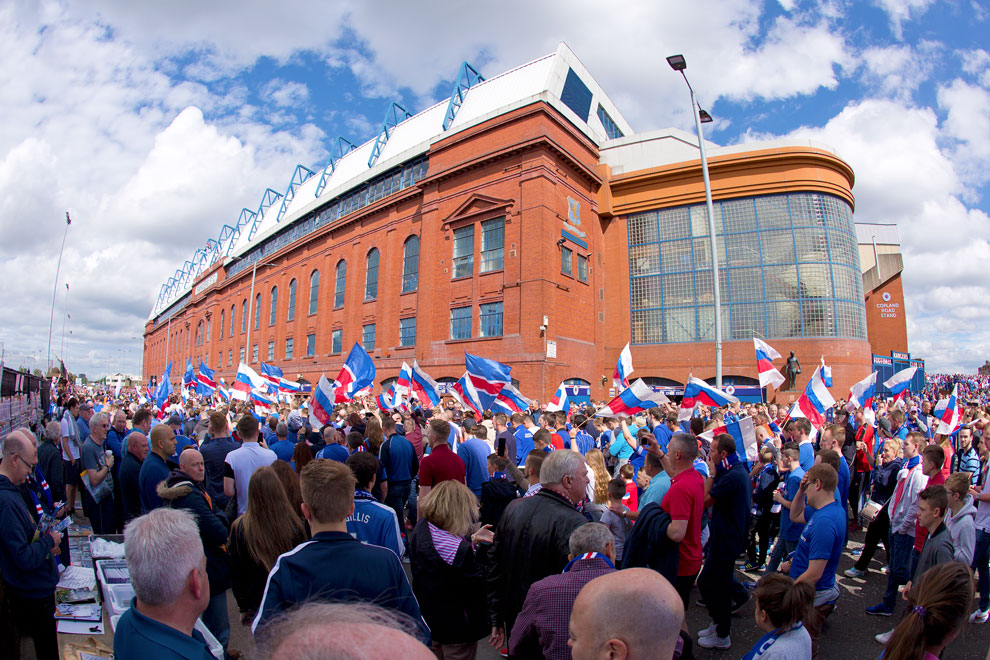 Back to the Promised Land, hopes had been so high among Rangers fans that the visit of expected SPL bottom feeders Hamilton Academicals would see a comfortable home win for Rangers’ first match in the Premiership for four years.

Indeed, Rangers, Wilson, Crooks, and Windass aside had a full squad fit and available, while their guests languished with ten first-team absences.

It all had the makings of a pretty smooth return to the top flight and a morale-boosting score.

90 minutes later, after the underwhelming starting XI which only featured three new signings took the pitch, we find ourselves head scratching and reflecting inwards, following a frankly dismal draw versus a hard-working and sturdy Hamilton side who gave Rangers more than a few problems.

Problems, it has to be said, that are fairly worrying to have when it is a home match and you are up against the side expected to go down next season by default.

It was a concerning sight to see a complete lack of faith in the new recruits by Rangers’ manager – only Joey Barton, Clint Hill and Niko Kranjcar took the field, while the rest of the XI was made up the same old for the Ibrox men.

And while Kenny Miller had the ball in the net inside two minutes, it did not count, and when Ali Crawford put the Accies one up with a gorgeous finish on half an hour following calamitous defending again from Rangers, it summed up exactly the step up Rangers failed to handle.

For 30 minutes some of the home side’s play was indeed very pretty, with some slick passing, off-ball movement and right back James Tavernier dribbling like Messi. Martyn Waghorn too had a very good game, arguably Rangers’ best player given his drive, energy, and skill; his apparent pulled hamstring on 80 minutes is a big blow for Warburton.

But when that goal went in, it epitomised everything that has been wrong for Rangers against better sides under the Magic Hat; lots of nice passing but a complete lack of penetration in the final third, and a hopeless defence which just seems incapable, 13 months on since Warburton and Weir took charge, of reading a match and consistently producing anything convincing.

Unfortunately this match added a pretty patchy midfield to the mix – Barton was basically a defender for the lion’s share of the 90, playing so deep particularly in the first half, and sacrificing the creative side of his game entirely. He did produce one or two excellent passes, but in order to protect the defence, his vision was impaired, and as time went on he started losing the ball more and more.

As for Kranjcar; tragic. He was just absolutely awful. Looked lethargic, out of his depth, uncomfortable, and his passing was mediocre. This guy looked like Iniesta against Motherwell, but today he was exposed as someone way off the pace. Hopefully he gets it back but he was a total passenger this afternoon and it is not hard to see, on this evidence (and that of his equally miserable display against Burnley) why his career has stalled.

Barrie McKay also produced a lot of huffing and puffing but next to no end product – he ran well from deep and his first touch impressed, but rarely did anything come of it, while Miller in the middle was mostly anonymous.

Defence? Rob Kiernan has become an utter liability – likeable though the chap is, on the field in Rangers’ rearguard he is becoming embarrassing to watch. Zero positional sense and totally out of his depth. Hill fared barely any better but he cannot cover Kiernan’s failings.

And Mark Warburton; the man turned Rangers round in the Championship. He gave us a Rangers to believe in, and I will be forever thankful for that, but there is an undeniable stubbornness with him, a refusal to change things (systems, starting XIs) that are not working. He goes with the same predictable XI core to start, promising rotation and pathways but never actually truly delivering on it, and has his favourites who he will never deviate from, regardless of form.

He brings on subs – sometimes they have an effect, sometimes they do not, but it is a slightly worrying sign that so many of Rangers’ best players and significant new signings (Rossiter, Forrester, Dodoo, MOH) were on the bench and do not look like they will ever be regular starters.

If Mark Warburton is to steer Rangers to SPL credibility, he needs to adjust to the step up in quality, and the demands the higher level places on himself as much as the players.

We used to think there really was not much of a gap between the SPL and the Championship – well, the worst in the SPL comfortably got a point at Ibrox, suggesting the gap might be bigger than suggested.

A serious amount of introspection and adjustment is required before Rangers travel to Dens Park on the 13th, because in present shape, with present personnel and present tactics, they will struggle to accrue anything there.