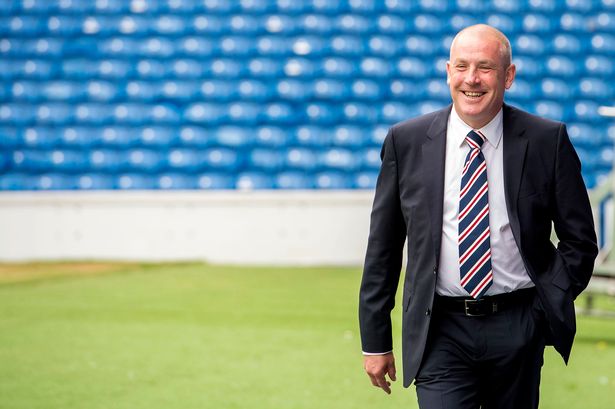 “I signed on for an extra year at Ibrox, because it is one of the best jobs in the UK”

Warburton and his assistant Davie Weir worked so hard to make sure that we won the Championship league last year, with a brand new, young team playing immaculate, exciting, attacking football. Mark went on to say:

“I love being at Rangers, and I treat it as a real honour and a total privilege to manage a team of the magnitude of Rangers”.


It really is a giant club with a huge following all over the world; holding the world record of winning 54 league titles also helps, coupled with our history through the years of being successful, from the 60’s in all our European glory years. I personally loved it when he went on to add:

“If we continue to be a very successful management team, then it is only a matter of time, before the European nights will be back at Ibrox. This is truly where Rangers belong, and indeed, it’s where we want to be within a fairly short time, as this is where the real money generates from”.

Once you get through to the group stages of the Champions League, you start playing with the cream of Europe’s teams and guaranteed sell-out crowds home and away, plus all the TV money that is involved. Warburton and Weir both know what is required for Rangers, before they can compete with Celtic for signing players that cost significant transfer fees, as well as the higher wage packet, that are all part of the overall financial package when you sign top players. Hence Mark’s very sensible comment:

“Let’s not get ahead of ourselves, as first we have to try and win the Premiership League, to qualify for the early season knock-out preliminary games, before you can get to the group stages of the competition”.

Mark Warburton has paid tribute to the “passionate” Rangers support as he hailed one of the biggest clubs in football in the wake of his new deal. In an interview with the Rangers website, he said:

“As a young football fan growing up, Glasgow Rangers was always one of the big names, so you get here and realise it’s the passion of the fans, it’s walking out at Ibrox and driving into the training ground. It’s a great feeling and you never get bored of that, you always recognise that and are very thankful, it is a great club to be associated with. The fans give us fantastic support, and the season ticket sales have been outstanding, and they need to see the progress in their football club. If we can keep doing that, we’ll be okay.”

Preparations for the new season have gone overall well, with Rangers winning the one friendly game in Charleston, US and following that up with four League Cup wins in only nine days. It didn’t suit Warburton to play so many games in so few days, but low and behold, it seems to have turned out extremely well in Rangers’ favour, when they became group winners, and now await Peterhead in the last 16. Only that Burnley loss blotted the pre-season copybook.

Rangers have been quick to add nine quality players to bolster the team for the upcoming campaign. With all our additions, and hopefully, the signing of a badly-needed centre back, we are all hoping we can challenge our Old Firm rivals Celtic for the title next season and prevent them from winning their sixth SPL crown in a row.

Dave King meantime hailed Warburton and his backroom staff for transforming his Rangers side, after the Englishman pledged his future to the Ibrox club. Mark and his assistant David Weir both penned their ‘significantly’ improved three-year deals which ties them to the club until the summer of 2019. Club chairman King welcomed the fact that his management team had demonstrated their long-term commitment to Rangers, days before the season kicks off.

“We felt that a significant readjustment was warranted at this time. What has not been witnessed outside of Rangers FC, is the fantastic impact Mark and his team have had in revolutionising the overall football philosophy at all levels throughout the club. Probably the most important, and biggest changes have been made with the new way the ‘Academy’ will be run from now onwards. We are delighted that Mark and David Weir have now accepted this extension of their commitment, to do all that has been planned, for the long-term benefit of the club”.

“This is a special football club and the football department will continue to work hard to build on the solid foundations that we laid down last season. Our debut campaign in Scotland was certainly a positive one, but we are all working tirelessly to deliver continued success for our fans. Competing at the highest level is the least our supporters deserve and we look forward to playing at a packed Ibrox every other week. I thank the Rangers board for again backing my player acquisition plan, and we are all eagerly anticipating the start of season 2016-17”

Things could not be going better for Rangers’ manager and his team, and it is no wonder they extended their deal. Just need to sort that defence out… (!)