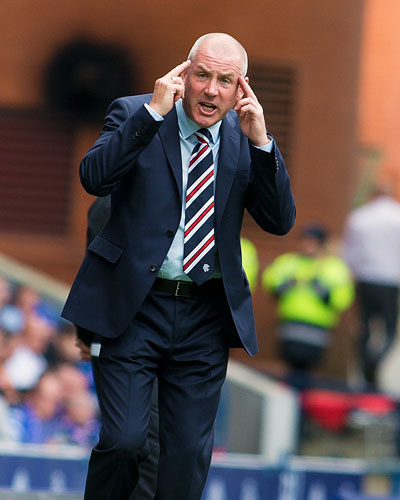 I felt moved to respond to a great number of tweets, FaceBook comments and comments on this site which make strong criticism of my last piece, under the guise of it only being one game.

The gentleman named ‘Donald’, for example, with a pretty valid comment below:

“FFS one game in and the players and management who gave us all such hope and belief last year are condemned, the seasons as good as over and we’re all doomed. Get a grip, your making yourself look silly again. Remember the Dave King fiasco.”

He makes more than a salient point; on Ibroxnoise.co.uk it is all about opinions, as it is with every other fan site.

On this site we give a platform every view – and if a reader comment slates an article and diametrically opposes every sinew in it, we like to be fair and give that comment air time. We can handle views which do not agree with us.

And Donald, like more than a few others, suggests over reaction from us and many other fans and sites. And we respect his view.

However, yesterday’s disheartening performance was the latest in a long line of failures against teams of a better calibre than Alloa under Mark Warburton, and while the Dundee result had pointed to those failures finally being addressed, the fact Rangers have not won a single league match since April 5th and Warburton’s record against ‘better’ teams is patchy at best should surely be worrying to all concerned.

In short, it is not just one game, it is a collection, and it is a huge elephant in the Mark Warburton room for anyone willing to look at it.

Against the better teams, Warbs’ Rangers have only managed seven wins in 90 minutes of 15 matches. Less than half. That is four home wins v Falkirk and Hibernian, the scrappy win at Rugby Park, the decent win at Fir Park and the admittedly stunning triumph over Dundee.

Since losing to St Johnstone last September, Rangers have drawn or lost in the remaining eight encounters with Killie, Falkirk, Hibs, aforementioned Saints, Hamilton and Celtic.

The problem is, that patchy at best form against teams of this calibre is precisely the form that will directly affect how Rangers fare against them in their natural habitat of the SPL.

The psychological impact of such middling performances and results cannot be underestimated, nor can the length of time it has been since Rangers triumphed in the league.

Some fans have been extremely angry with any criticism of the team and the management; the aforementioned ‘only one game and you are writing us off’ argument being used time and time again.

First off, no one is writing Rangers off – there is a full season ahead and plenty of time for Warburton to make the adjustments along with the team.

The point I and many are making, though, is that those adjustments are utterly critical in order to be successful. Tighter defence, cutting edge in attack, creative midfield, and a plan B if things go wrong, not to mention willingness to use in form players in a starting XI – these are things which need to be done, and which simply do not exist at present.

That is why we pay Warbs and his squad the big bucks, to plan the adjustments and execute them on the field.

Yesterday showed absolutely no sign that such an adjustment had been made, and that is the concern.

Rangers’ away record under Warbs against the better sides is disappointing at best – just two wins from six (Hibs, Falkirk, Killie and Motherwell), and that critically needs to improve come Dens Park.

I hope to sit here come full time with an idiotic grin on my face of how wrong I was to doubt the team, and to lavishly praise Warbs for his team selection and tactical approach.

But I always reserve the right to criticise, as do all of us – blind faith will not take Rangers forward, only progress and introspection will.