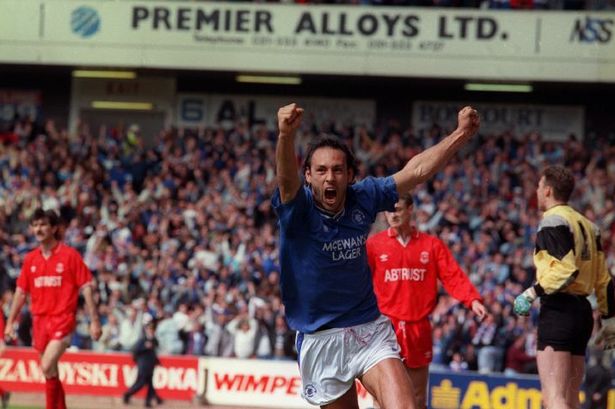 Ibroxnoise.co.uk’s resident retro analyst Kenny Reid takes us back a quarter of a century to one of the greatest title triumphs in living memory.

HAVING served his apprenticeship at firstly Tannadice and then Ibrox under the watchful eye of Graeme Souness there was little doubt that Walter Smith was destined to take the helm at some stage. Continuity and his already strong bond with the players would ensure that his inevitable appointment would go through seamlessly.

However when Souness dropped the bombshell in April 1991 that he was taking the Liverpool job with immediate effect the timing was very far from ideal. Without a doubt Walter was the only choice as replacement but the pressure was almost intolerable. A third consecutive championship which just weeks before looked an absolute formality had now turned into an absolute nightmare. An injury list that wouldn’t have looked out of place at the front line of a war zone coupled with a loss of form had seen points steadily frittered away and was exacerbated by the form of a resurgent Aberdeen side that could sense that they might just beat us to the punch and win the title.

Four games were left and we held a slender 2 point lead. His first match was a seemingly routine trip to Paisley that saw us have to wait 84 tortuous minutes before Sandy Robertson scored a most welcome winner for the Gers. Next up was another nervy 1-0 win, this time at home to Dundee United. Halfway there and although the victories were not convincing it seemed as if Walter had a happy knack of being able to get a result irrespective of performance.

Our rivals for the flag had also posted victories to maintain the status quo at the top. Looming large on the horizon though was a final day shoot out at home to a Dons side that pundits were predicting would be champions. Before that game however a calamitous loss at Fir Park saw us lose the lead in the title race on goal difference. A brutally straightforward scenario was presented to all of a blue persuasion; we had to beat Aberdeen to win the title. Just weeks beforehand the title seemed in the bag but there was no point in looking back as the title would be decided in the next game, so it was, technically, still in our hands.

From the new man’s perspective it was ludicrous that the outcome of the entire season would be placed at the door of a manager who had taken charge of just 3 of the 35 league games thus far. Showing the dignity that we came to naturally associate with the man though he just refused to buckle and accepted this as part and parcel of life at Rangers where winning was everything and second truly was nowhere.

His team selection for the final showdown was fairly easy as he virtually had only 13 players to call on. Already missing were club captain Richard Gough and record signing Trevor Steven and with so few positives it seemed a long shot to win the title. On the bench were the barely fit McCoist and Ian Durrant, who had only returned to fitness 3 weeks beforehand following almost 3 years out.  Even then our apparent injury curse did not abate as left back Tom Cowan broke his leg and in the second half John Brown’s Achilles tendon finally gave out. A tense opening half ensued with the two genuine chances that were created thankfully being spurned by Aberdeen as the interval approached.

There was however time for one last attack. The ball was played out to Mark Walters on the right wing. Not normally renowned for his left foot it was something of a surprise to see the winger cross the ball with his wrong foot but it was a delicious delivery. Having had nothing but starvation rations until then in terms of service it was no surprise that Mark Hateley positively devoured the cross to send a pinpoint header into the top left hand corner of the Aberdeen net from about the penalty spot. I can still see it now as I sit in line with the penalty spot in the Govan front at the Copland end. For those not at the game it is difficult to describe the noise that this one single action had caused as the ground exploded into a wall of delirium and relief. For those like me that were lucky enough to have been present you will surely be sitting nodding in agreement.

It is funny that even though the match and subsequently the title were still so delicately balanced that there still seemed to be a collective belief that we had scaled the mountain and were descending the other side. Having breached the stereotypically mean Aberdonian defence we had done the hard part, come what may we would repel any pressure from the Dons. Truly we were the twelfth man that day and made such a din that you have to check the record books to remind yourself that there was only 36,000 there as, if you recall, the club deck work had restricted the attendance significantly.

Demonstrative proof of this can be found in David Robertson’s comments as the full back would admit when he joined the Rangers that summer that his last game in red was a nightmare and that the noise was incredible. This noise also resonated with the rookie keeper Michael Watt who kept goal for Aberdeen; his nerves would not have been helped by a wee reminder from Mark Hateley at the first cross ball to come his way that they had not won anything.

The second half began amid similarly chaotic scenes and shortly afterwards it got a whole lot better. A shockingly bad lay off from Scott Booth to its intended defensive target on the touchline inadvertently released Maurice Johnston at the edge of the box. Just as we anticipated a title-clinching second goal, the wee man completely fluffed his lines to send the tamest of shots creeping towards Dons keeper Watt. Not wanting to be outdone he duly fluffed his own lines to spill it out to the feet of the onrushing Hateley who duly despatched it into the net for safe keeping. If the roar for his first goal was load then I am sure that the roar for the second goal must have measured on the Richter scale although in fairness some of the noise was attributable to the sound of broken glass from the Aberdeen bottle well and truly crashing.

It was all over bar the shouting, plenty of shouting. They knew it, we knew it and boy did we let them know that we knew it. The game petered out towards its inevitable conclusion. However if one moment captured the spirit in the camp, it was the injury to Bomber Brown. A real doubt before the game he declared himself fit knowing full well that he wouldn’t last the 90 minutes. Heading yet another ball clear he collapsed on the turf clutching his leg. His race had been run but the sight of him conducting the east enclosure from his stretcher will live with me forever not to mention the fedora that he wore for the post-match lap of honour (on crutches). The game ended with Hateley at left back, Terry Hurlock in central defence with Durrant and McCoist running on a combination of fumes, adrenalin and sheer desire. My abiding memory of this game though is Walter striding confidently and purposefully across the turf at the end. The man exuded calm and although good cop to Souey’s bad cop, he clearly already had the respect of the players. The Gaffer had inherited a team seemingly broken, dispirited and in real danger of throwing away the title but who were quickly galvanised to secure the main prize. Refusing to rest on his laurels and demonstrating that he knew full well the demands of this unique football club Walter declared after the game that the hard work was still to come and that he was already thinking of next season. It is testament to this remarkable man that he was able to come in and simply get on with things, even after the loss at Fir Park he still kept things together to ensure the title was secured in all honesty against all odds.

Even at this early juncture Walter came across as an absolute gentleman who acted with nothing but class. Results were treated with the same calm demeanour whether it be defeat, draw or victory. There was no wild ranting at referees and no constant sniping with the SFA that at times blighted Souness` reign. Mr Souness perhaps needed these confrontations but Smith was not one to indulge in such shenanigans. He displayed an almost statesman-like dignity. The Gaffer preferred to do his talking on the park and clearly his players were more than happy to speak for him.
His baptism of fire laid the foundation for future success.

Thanks Walter, you are a Prince among men.