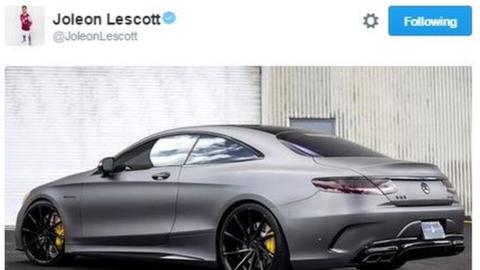 Yesterday Rangers’ surprising move for Joleon Lescott fell through after contradicting reports from various sources ranging from family reasons, to better offers from other clubs to the player failing a medical at Murray Park.

I say ‘surprising’ because this is a player with a frankly awful reputation, who had last seen his best before his excruciatingly drawn-out and overpriced switch to Manchester City seven years ago, and who had made more news for insulting his club Aston Villa and posting narcissistic photos of his latest ‘wheels’.

It was all the more surprising that Mark Warburton was genuinely interested in Lescott when he had a 52-time Swiss cap training at Murray Park in Philippe Senderos, a sub-32 year old defender working professionally and hard to earn a deal and prove himself.

It is not every day a former Arsenal and Milan stopper is aiming to prove they have what it takes to compete in the backwater of the SPL.

Ergo, Warburton will not look back too fondly at the Lescott episode – he went out of his way to work with bringing the former Everton stopper to Ibrox, and it says even more for this curious affair that Villa were happily willing to pay a chunk of the 34-year old’s wages in order to get him off their hands.

To describe his performances last season as abysmal is doing him a kindness.

One Villa supporter described his legs as ‘gone’ and that former Ranger and Villan Carlos Cuellar at his worst was still a million times better than Lescott; add to that him slurring the supporters and club with a poor attitude, including being relieved at relegation, not to mention the poor approach to matches of looking disinterested, and the fact Aston Villa could not get him off their hands quick enough says volumes.

Warburton desperately needs a leader at the back. We really get this, and sometimes desperation leads to very bad calls of judgement. Lescott was clearly one of these, especially with the correct and professional approach of Senderos being the alternative.

It will never truly be known if Warbs was keeping his options open regarding Lescott, and felt obliged to offer him a deal after making such effort to engage with him, but it really does feel like a bullet dodged when one really examines the former England international’s recent failing career.

This article probably smacks of knee-jerk bitterness, and sure, maybe I will concede annoyance on some level that a player has acted in this way towards Rangers, wasting our time and effort when our management could have been acquiring someone who actually wanted to be at Ibrox; but when one is also rational and honest about it, this was a move most fans simply positively spun because he looked like he was coming to Rangers.

Yes, his form was once England international quality, and there is no denying if he had joined this article would spinning him very positively (hardly going to smear a Rangers player, are we?), but that Man City released him happily, he underwhelmed at West Brom then Aston Villa absolutely hated him says all you need to know about what he might have ‘brought’ to Rangers.

Did he really fail the medical? Did he not want to come? Did Sunderland offer more?

Truth is I do not care; the whole thing was a waste of a week when Rangers needed to secure a defender, and hopefully they will do so imminently when Senderos finally puts pen to paper to sign up at Ibrox.