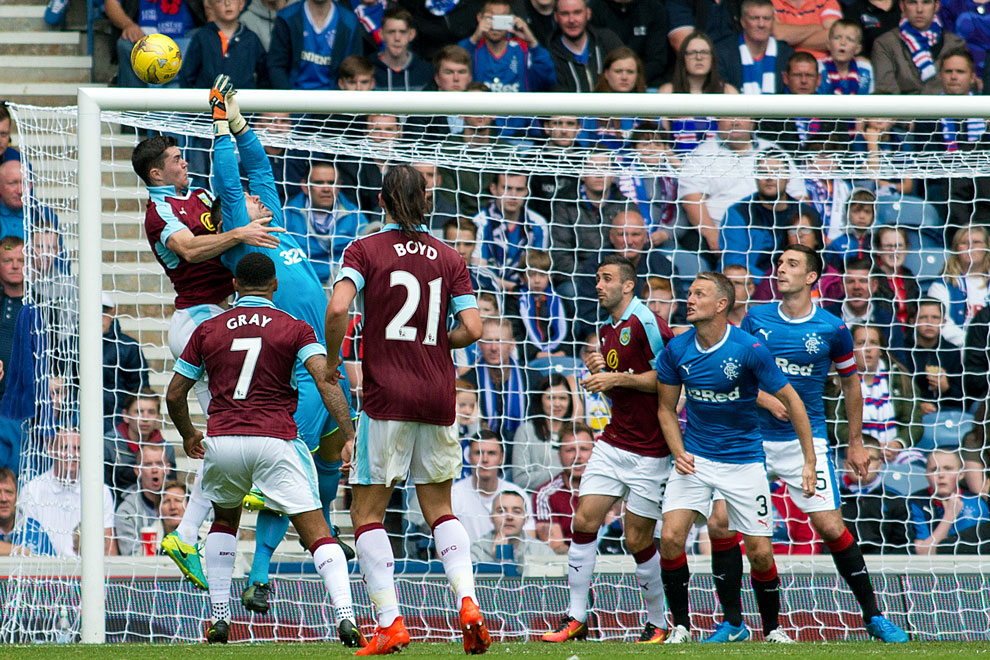 With just six days to go till the new season starts properly in earnest at Ibrox, Rangers have certainly recruited well. Midfield has seen some real heavyweights in the guise of Niko Kranjcar and and the inimitable Joey Barton, while Northern Irland international Lee Hodson and the infinitely promising Josh Windass put pen and paper on moves north to join the ranks in Govan.

And while defence has seen aforementioned Hodson and former QPR stopper Clint Hill bolster its roster, the same old excruciating fallacies were crudely exposed by Burnley on Saturday, raising the same old concerns about them.

I feel like a stuck record, going on and on about defence, but the harsh truth is Mark Warburton’s back line has rarely looked impressive, and after well over a year of these vulnerabilities, the failure to address them has become a genuine concern.

Rangers could get away with these weaknesses in the Championship, but against Premiership opposition week in week out, it really will be another story.

One major argument fans make about our ongoing malaise back there is to wonder why a veteran defender who played at the top of the game in his (slightly) younger days in the shape of David Weir cannot seem to instill his wisdom on the players who make up the rearguard.

After 12 months of coaching this group of players, Weir seems to have, to put it bluntly, had absolutely no influence in tutoring defensive responsibility.

If anything, Rangers’ defence looks even worse now than it did last season, with Robbie Kiernan especially looking like a player regressed and utterly bereft of the understanding of the position and confidence to act on it. He seems lost, and while he is a genuinely good bloke, there are serious doubts that he has what it takes to cope with the transition to the top flight in Scotland.

Clint Hill, for his part, has not truly impressed fans, and while his influence was certainly notable against meagre opposition like East Stirling and Annan, it was absent against Burnley.

Then we have the divisive Danny Wilson; a player who will probably never truly be accepted by a great number of Rangers fans no matter what he does due to the manner in which he left. But the truth is he is arguably the highest calibre defender Rangers have, with experience of the Champions League, English Premier League and its Scottish counterpart to his name – he does lack concentration now and then, true, but at his best he is the most reliable and has bailed Kiernan out repeatedly. But he will never boast the former Wigan defender’s popularity.

The only other contender is utility man Matt Crooks, whose primary slot is defensive midfield – and he still is not even fit yet.

Hamilton on Saturday is a test. They are a bit of a step up from the Championship (they were third bottom last season, if reasonably safe from play off contention) and if Rangers’ defence manages to hold tight or look fairly solid, then the Burnley fiasco can probably be dismissed, at least for now.

But if the pattern from that match, and the one reflected in a great number of the matches Rangers lost last season against the ‘better’ sides like Falkirk, Hibs and St Johnstone continues, serious examination of the direction Rangers’ defensive unit is going will be needed, and a lot of soul searching about what solution is required must follow.

Rangers cannot go through a season of the SPL with a defence that is utterly non-cohesive, and we must trust Warburton and Weir to tinker properly and come up with the right solution come the curtain raiser.