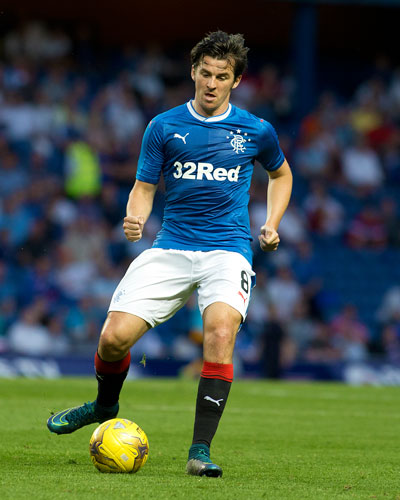 It was the moment Rangers fans have waited for over the course of 10 weeks. Ever since Joey Barton was bizarrely linked to Rangers, before it became apparent the interest was real, the hype over his first appearance in the famous Light Blue jersey has achieved epic proportions, and while it had been hoped he would start last night’s League Cup group match v Annan, his sub appearance was highly anticipated instead.

So after all the bluster, the Twitter trash type, the media hype, the sheer attention this signing has gained; how did Joey Barton actually do on his debut at the Hallowed Turf?

He was roared on with a massive cheer, replacing the glorious Niko Kranjcar, and while Joey Barton will face bigger tests than Annan, like Kranjcar and all the other debutants over the past two matches, the new signing fit the team like a glove.

In fact, he not only strolled his first appearance, he also proved the leadership qualities fans hoped he would bring to the team were very much in evidence – just like Hill at the back, like Waghorn up front, Barton led through the middle and dictated the tempo, and barked commands around like a true leader.

Barton was the best player in England’s second top tier last season – and while there was one curiously misplaced pass to forget, his arguably contribution last night reflected why he is arguably at his peak right now.

The man has matured – gone is the idiotic petulance of his youth, his ridiculous press conferences in broken English, his curious appearances on Question Time and his on-pitch indiscretions such as stamps – the man, a father to two now, has grown up and matured, as much off pitch as on, and at 33 is cultivating his experience in the right way and Rangers, like Burnley last season, are set to take full advantage of him flourishing in this way.

Last night we saw him deep in the position we expect, communicating with everyone, making sure his team mates kept their discipline, and showing no lack of ability either. He even nearly scored a wondrous free kick – who knew he had that in his locker?

After all the horn tooting, finally the fanfare was laid to rest and we finally saw what Joey Barton will bring to Rangers, and it is a very good sign.

Even during his half time warm up he was having a warm-hearted chat with the man he would replace, Niko Kranjcar, showing a real unity that has bonded this newly-built Rangers squad. As he went off it was high fives for everyone.

Joey Barton is one everyone in Rangers’ playing squad will look up to, even his senior in Clint Hill. No one in Rangers’ squad has more wisdom of football than Barton – having been there, done that, made the mistakes, learned and matured from them – even the wily veteran Kenny Miller can only pick up good things from Barton.

And herein is another benefit – Barton will equally learn more from those around him too – as much as he will guide them, he will also learn from the Hills, the Kranjcars and the Millers to name just three.

How did he actually do on the pitch? Like the rest, tougher tests lie ahead, but if last night is an indicator, Joey Barton is the missing piece of the midfield puzzle for Mark Warburton.