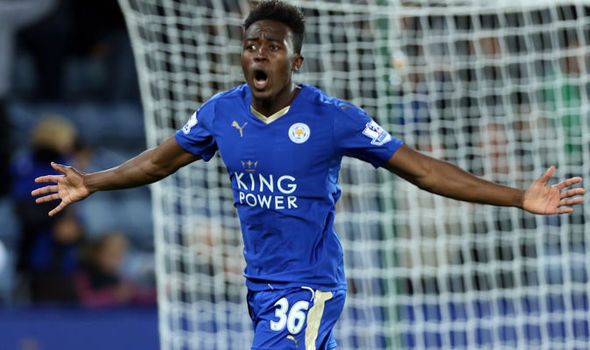 It looks like Frank McParland’s fishing for new talent to bring to Rangers has paid off once again, when he found a new pearl in the sea, with winger-turned-striker, Joe Dodoo the former Leicester City player. The youngster’s contract expired at the end of June, but he has been offered new terms by the Foxes.

Unfortunately, they already have England striker Jamie Vardy plus Shinji Okazaki and Leonardo Ulloa, before they added new record signing Ahmed Musa to their squad.
Unfortunately, with all those strikers ahead of Dodoo, he has almost no chance of a first-team opportunity, unless he moves to Rangers.

Dodoo was born in Kumasi, Ghana’s second largest city, but his grandmother brought him to Nottingham in search of a better life when he was only eight years old. Joe is eligible to represent England or Ghana internationally. In March 2013, Dodoo was called up to the England under-18 team and played in a match against Belgium. Shortly after Joe made his senior debut for Leicester, reports emerged that Ghana wanted Dodoo to pledge his international future to them over England.

He made his first team debut for Leicester City on 25 Aug ‘15, in the second round of the League Cup away to Bury at Gigg Lane. He played the full 90 minutes and scored a hat-trick in a 4–1 victory (video here) also assisting the goal by Andrej Kramarić, After the game Bury stated that they were interested in signing him on loan. Four days later, Dodoo made his first Premier League appearance, as a 72nd-minute substitute for Marc Albrighton in a 1–1 draw with Bournemouth at Dean Court.

In the next round of the League Cup, in his first game at the King Power Stadium, Dodoo scored the opening goal after six minutes in a 2–1 extra-time win over West Ham United. After the match, manager Claudio Ranieri said:

On 19 Nov ‘15, Dodoo joined Bury of English League One on loan until 18 December. He made his debut two days later, starting in a home game against Burton Albion and contributing to the only goal of the game in the 40th minute when his low cross was put into the Burton net by their defender Jerome Binnom-Williams.

Rangers made contact with the Foxes to inform them that Dodoo would be travelling up to Glasgow, with the view that it would suit both parties to see how each other liked the situation of Joe being a loan signing or possibly permanent. This enabled Dodoo to work with the rest of the players to show what he can do for Rangers, and also for the Ibrox side to show Joe what he would be getting from Rangers in return. I suggest that it was a good way to help both parties make up their minds about signing an eventual deal.

Glasgow giants Rangers are in a fantastic position of being able to take a 21-year-old, 6’ striker with good potential, and turning that talent into a prolific goal scorer. With the highly talented midfield of Joey Barton and Niko Kranjcar supplying the defence splitting passes, coupled with playing with two classy wingers supplying the crosses – how could any really gifted goal scorer fail? This is what Dodoo needs at his stage of his career, and to be playing fairly regularly with such an attack minded team, trying to win its 55th world record league title.

Last night outside Ibrox, he admitted in a short STV interview that he would be excited to join a club the size of Rangers, and that he used to watch them on TV when he was younger, after Mark Warburton set his sights on landing the recently turned 21-year-old from the English Premier League champions. Joe has been training at Murray Park since Monday, with the rest of the new players, and he is very impressed by what he sees so far. After training with Rangers yesterday, Joe was taken on a tour of Ibrox Stadium, and was knocked out by the surroundings, the trophy room and the tradition of the club. Will all this help to convince Dodoo, to sign for the mighty ‘Gers?

Warburton, who extended his stay at the club by signing a new deal recently, has made eight summer signings, including the high-profile captures of Joey Barton and Niko Kranjcar, but he wants a new striker and another centre back, to complete his target of 10 new signings, for the start of the season.

It looks like manager Claudio Ranieri would prefer the youngster to sign on again, and then send him out on loan, before he is ready to challenge all his first-choice strikers. Should Joe reject that new contract and move to Scotland with Rangers, I don’t think they would have to pay a training compensation fee to land him, as his contract had run out.
Even if they have to pay for him, a fee of only £250,000 would be due to Leicester City.

Rangers have just Martyn Waghorn and Kenny Miller as recognized first-team strikers, while 19-year-old Ryan Hardie could be sent out on-loan again, if Dodoo signs.