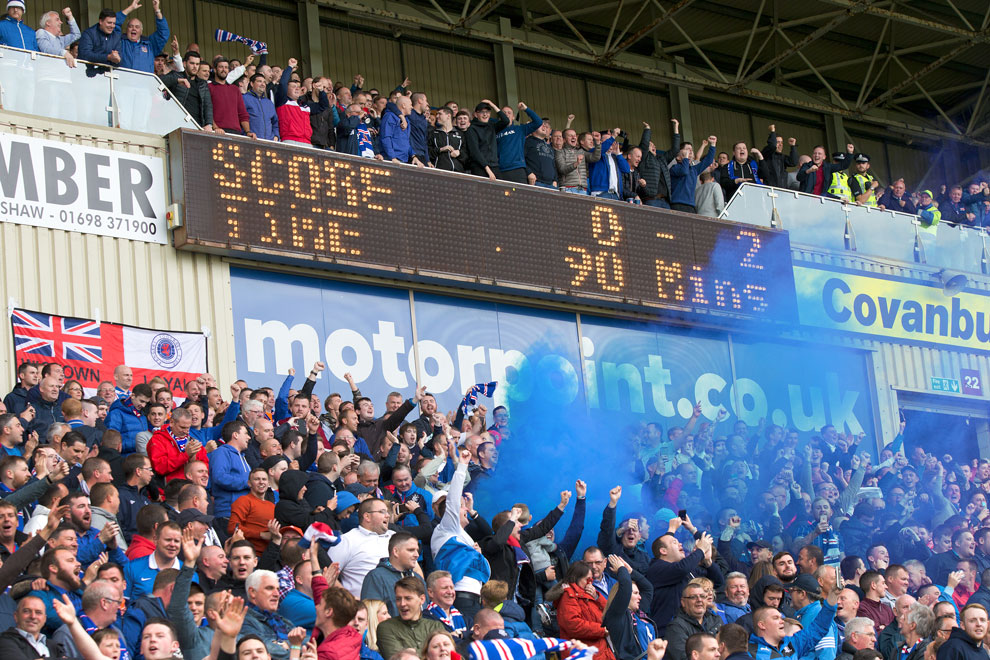 With Rangers’ first competitive match of the new season out of the way, while some might argue it is a little early to judge, at the end of the day midfielder Andy Halliday disagrees, describing yesterday as a ‘marker’ in the build up to kick off. And frankly I agree with him, as I alluded to with my piece on revenge. So, let us provide some player ratings to kick off the new campaign and see who looks ready for the step up, and who might be struggling.

A mixed bag for the stopper. Some good saves bailed Rangers out more than once, but still lacks assurance at the back and fails to really command those around him and aerial balls. He is not filling enough fans with confidence at the moment, without necessarily making said supporters groan with disgust either.

It was very much typical Tav, bombing forward and leaving the back recklessly exposed, but his goal was stunning and while his forward play took a little while to really click, he motored smoothly in the second half.

This partnership with Kiernan does not, never has and never will work. They are two binary stoppers who fail to lead each other. Wilson made one or two good interceptions, but was caught high too many times which a better attack might have punished.

Failed to clear his lines half the time, caught high even more than Wilson was and was the architect of many Motherwell counters – Kiernan is desperately struggling these days and his inability to even jump with attackers some of the time was a bit worrying.

All of Motherwell’s early counter attacks came down Rangers’ right, which is because Wallace, while not perfect, rarely lost the ball, and knew when to get back. Rangers were fairly comfortably on our left thanks hugely to Wallace.

He might not be a DM by trade but he is doing his damndest to keep his place. He worked extremely hard, never stopped roaming, and took midfield by the scruff of the neck. Was caught a few times by Motherwell counters, but this was generally a very polished display by One of Our Own.

He will be disappointed in himself after this one – he was not so much bad as quiet. His usual busy work and attacking guile was strangely tepid and while he did not exactly do a lot wrong, he also did not do a lot, period. Many fans are worried he may be one of the first midfielders to lose their place to the new signings. On this display, he might be worried about that too.

Capable of better – barely featured in the first half, got into it more as it wore on but by the time he was starting to click a little he got subbed. An underwhelming day for the normally composed creator.

Beyond his goal he was heavily involved as a major outlet in attack – while he was not too composed with his finishing, he was in the right places to try, and there was obvious fear in the home defenders when he had possession.

Actually a quiet day in productivity levels by his usual standards, McKay was on the ball a great deal in the first half especially but did not create a lot. But as ever, he was constantly available as an outlet which always takes pressure off team mates.

Not his best display, and missed a couple of glaring chances – looked angrier than usual and frustrated with himself, but his track back and tackle was warmly appreciated by everyone of a blue persuasion and showed even when it was not his day, he always gives everything.

This is where things get tasty. This is where we see what quality our new recruits can offer, and to call it an upgrade is an understatement. Sure, Niko’s first contribution was an air shot with his left foot, and another simple chance went wide also with his weaker peg, but everything else about the Croatian maestro was a masterclass. From his feints, to his eagle-eye vision, to his sumptuous composure on the ball, Kranjcar owned the second half and almost everything went through him. For a guy just coming back to fitness, he slotted in Rangers’ midfield like a diva and was absolutely faultless.

Turns out Battery was not a false dawn. O’Halloran looked hungry, energetic, creative, and weaved his way through ‘Well players like they were not there. Just like Oduwa when Livi came to town last season, MOH was at the receiving end of the predictable rough treatment from the thugs who masquerade as defenders in Scotland – it was the only way they could handle him.

Another quality display from young Josh, also showing Battery was no fluke – industrious, creative, and a great eye for a pass, this kid might be from League 2 in England but he is a serious upgrade for Rangers’ midfield.

No conclusion, that will be for another entry; but feel free to disagree/agree with the ratings in the usual place folks.