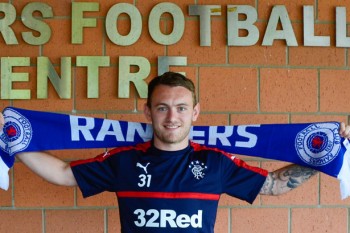 Dave King believes the Ibrox crowd have reaffirmed their faith in the Rangers board after season ticket sales broke through the 40,000 barrier, and the ‘Gers chairman had set his sights on achieving a new record for briefs this term as Mark Warburton’s side return to the Premiership for the first time in four long, depressing years.

Rangers have captured eight new players, to add strength and depth to the Light Blues’ ranks, with two or three more new recruits still to be added to the squad before the new season starts. We are now in a situation where most of our supporters are confident that Rangers can challenge for the top flight title this year.

Here are 20 good reasons why we should all buy a record breaking season ticket!

Joey Barton has the ability to run and boss the midfield from the centre of the park where Rangers will receive his full repertoire of his passing skills, coupled by his ball-winning tackles.

Niko Kranjcar the 31-year-old, classy 82-times capped Croatian midfielder, by his own admission, is best played as a No.10 in the team, playing just behind the strikers in a forward role, but is ‘happy’ to play where Mark Warburton wants him to play.

Matt Crooks, our new 6’ 4”, 22-year-old signing from Accrington Stanley, can play either as a centre half or as a holding defensive midfielder, but the truth is, he is so versatile, he has performed in so many different positions for a young player throughout his short career.

Josh Windass is an attacking midfield player, who is fast, and can glide past his opponents with ease and seems to score in every second game he plays in. He scored an amazing 16 goals in 31 games last season for Accrington Stanley – a brilliant return for a midfield player, and he’s still only 22.

Jordan Rossiter is only 19 years-old and is the current England U21 international captain who has featured at every level since he was only 15. He is an ex-Liverpool midfield player who certainly has a load of talent, and Frank McParland was determined that Rangers should sign him for the long term future of the club.

Clint Hill, the 37-year-old, ex Queens Park Rangers centre half with the English Premier League and Championship experience, comes very highly recommended by Joey Barton and Niko Kranjcar who have both played a few seasons with Clint, and they both wanted him to sign for Rangers.

Lee Hodson is a 24-year-old, Northern Ireland Internationalist, who is a versatile 5’ 8” right back. He played 91 times for Watford in the English Championship and 18 more for Brentford in English League One & 51 games for MK Dons in English League One then another 17 games in the Scottish Premiership League, with Kilmarnock last season, so he has the experience to do very well, in his Rangers career.

Matt Gilks, the 34-year-old, extremely experienced, ex Burnley and Scotland international number 1, should be, in my opinion the No. 1 goalkeeper for the start of the season.

We have also retained the services of our best players from last year’s winning Championship team.

James Tavernier our goal scoring right back.
Martyn Waghorn scored 28 goals in only 34 games.
Kenny Miller had a fabulous season and pitched in with goals as well.
Lee Wallace our tried and tested captain and goal scoring left back.
Barry McKay forced his way into Gordon Strachan’s Scotland team as a left winger.
Harry Forrester was a brilliant signing for us in January 2016.
Andy Halliday our very own Rangers supporter in the team had a wonderful season last year.
Jason Holt one of our best players last year.
Michael O’Halloran still trying to find his best position at Rangers but so much potential
Rob Kiernan at 25, can only get better.
Danny Wilson had a mixed season, but played a blinder against Celtic last season.
Wes Foderingham had a very mixed season, and will fight to prove himself

20 good reasons why we should all buy a record breaking season ticket!