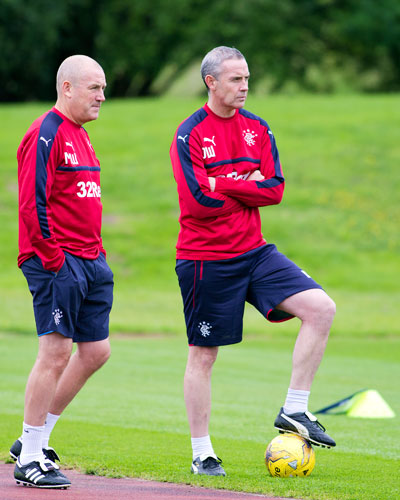 Rangers’ new board knew in 2015 that they had to make changes to the way the club was being run and managed as it was haemorrhaging money every month and relying on loans from wealthy investors just to keep the club afloat.

Mark Warburton and Sir Davie of Weir were seen as a potential top management team after their exploits at Brentford together. I have said all season that Dave King and his Rangers board have to be thanked for having the insight to bring them to Ibrox. They have turned out to be a masterstroke by the club, as there was a definite risk involved in trying a new approach to Rangers’ traditional policies of hiring managers.

Mark and Davie took the Griffin Park club up into the Championship at their first time of asking – and then repeated the job by taking Rangers up to the Premiership in their first year in Scotland – no fluke then!

Mark, a former City of London trader who had only moved into coaching late in his career, and had incredibly been a manager for a mere 18 months, was an immediate success – an astonishing, astounding achievement (a straight A student of the game).

He started with Brentford as a youth coach and worked his way up to eventually becoming the Sporting Director. His role included dealing with agents, club finances and contract negotiations, in addition with continuing to scout young players and recommending them to the management.

All of which helped him as he set up a style of play at Brentford that was exciting to watch and mostly produced the right results. In spite of their success Mark and Davie were eventually replaced by a more experienced manager – which has turned out to be their loss, and our gain – thank your stupid decision makers at Brentford!

I am a great believer that you will always learn much more from your bad defeats than you ever will do with winning easily! The facts speak for themselves. Rangers won the first 11 games with Mark and David in charge and it was the best start of any Rangers manager beating the previous record of eight wins in a row set by Bill Struth, way back in 1920.

Rangers fans, and possibly the management team and our new board, all started to think that this new Rangers team of cheap buys and free transfers were much better than they actually were. It took our League Cup game in September against Premiership side, St Johnstone to expose our weaknesses that Championship teams hadn’t worked out.

Despite our good possession in the game, St Johnstone just sat back and defended well, mopped up all our attacking moves and with every loose ball hit us on the break. Michael O’Halloran ran amok with us and we eventually signed him in the January transfer window of 2016. Both of our marauding wing-backs were continually targeted as weak spots in our defence, as they were caught up the park during our attacks and quite frankly our two centre-backs couldn’t cope with the quick breaks and far too many of our players were caught out of position.

After Rangers beat their Old Firm rivals Celtic on penalties in the semi-final of the Scottish Cup at Hampden, Rangers didn’t win another game all season – a truly dreadful climax – but it proved be a blessing in disguise.

It certainly demonstrated to me that the team that won the Championship wouldn’t be good enough to compete at the top of the Premiership. The team was quite rightly criticized for their tactical naivety and for being unable to cope with quality opposition defensively.

A 2-1 defeat to nearest challengers Hibernian at Easter Road in November was followed by further points dropped to Livingston away and to Morton at home. A 2-1 loss to Falkirk away allowed Hibs, who had been nine points adrift at one stage in the 2015/16 campaign, to nearly draw level and the pressure was well and truly on Mark Warburton and Rangers.

Hibernian winning 3-2 in the Scottish Cup Final was a devastatingly disappointing way for Rangers to end what had been a hugely successful season. The need for height in the team is imperative, with two tall centre-backs and a towering goalie a MUST in my opinion. I would expect a man of Mark Warburton’s ability to be aware of this himself, but such players may not come so cheaply this time.

But it is perversely thanks to Rangers’ critical losses last term that our management team know truly what needs fixed on the pitch, and this summer should see those being implemented.