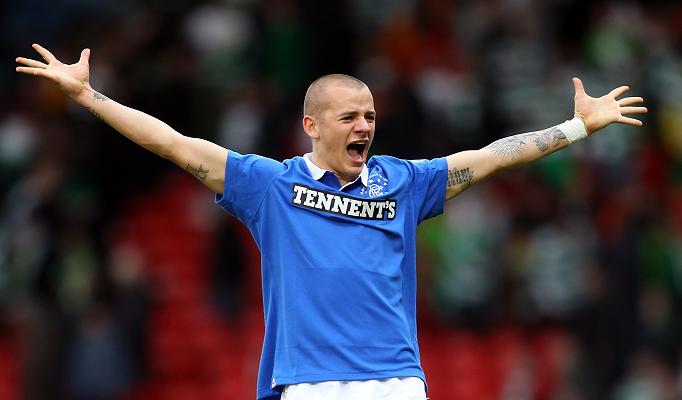 Vladimir Weiss is no stranger to ingratiating himself to Rangers fans on social media, and has now ramped that affinity up in the past 24 hours with a ‘come and get me plea’ admitting he would love to return to Ibrox following his productive night for Slovakia v Russia.

The young Manchester City player was loaned to Rangers to play on the left wing in season 2010-11, when he was still only 21-years-old. He has, as mentioned, stated before that he would relish the chance to return to Rangers in the Scottish Premiership, as he looks to return to the more competitive matches in Europe, after spending too long playing in Qatar.

He learned quickly to love playing for our great club and even today always looks for our results every week and often tweets about us. He was at a very impressionable age when he played for us, and he was made to feel at home in Glasgow right away and he always appreciated the feeling of being a first-team-player at Rangers.

He is a fast and tricky winger with a good tactical brain on him. He knows how to defend well and when he should be attacking and also to take advantage of staying wide in his position, to spread the play for the full width of the park. He played in 23 games during his successful spell at Ibrox and managed to score 5 goals from the wing which is not too bad. In his only season with Rangers he won an SPL League medal and completed the double with a League Cup medal in another famous Hampden Park victory over Celtic, with Weiss laying on the winner for Nikica Jelavic
to score.

He is currently performing in the Euro 2016 tournament playing in his favourite position on the left wing for Slovakia and he scored a smashing opening goal against Russia yesterday. His dad used to be the manager of the national team when he first broke into the side, and now he has around 60 caps to his credit and he is very well established in the regular starting line- up.

The much travelled left-sided-player played the next season after Rangers in Spain on loan again from Manchester City – this time to play for La Liga side Espanyol – where he played for 31 games and scored 4 goals.

He finally left Manchester City for newly-promoted Serie A side Pescara from Italy and played in 23 matches, scoring 5 goals, then moved on a year later to Olympiacos F.C. in the Greek Superleague and played in 25 games with 6 goals scored.

On 26 January 2014, Weiss joined Qatari football club, Lekhwiya SC and perhaps feels that he has spent enough time away from the competitiveness of the European games and the atmosphere of playing his football for Rangers.

Vladimir has stated several times in the press that:

“If it’s not Rangers next year then I really want to come back at some stage in my career because the club is in my heart now.”

So we will open it to the readers: