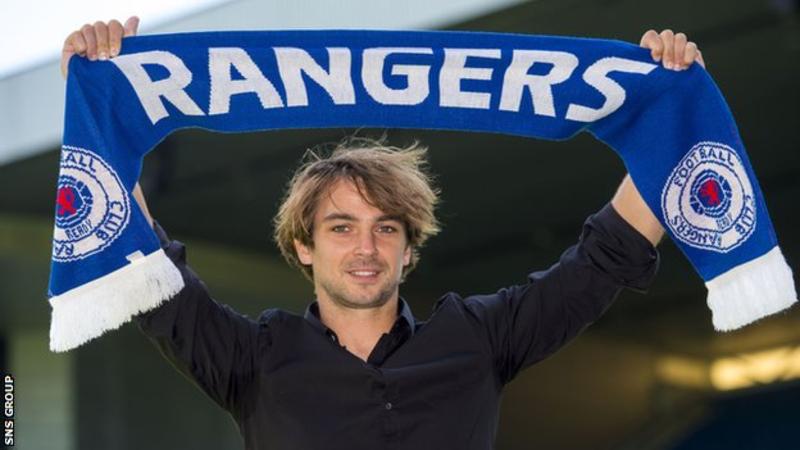 I think that every Rangers fan would have been extremely happy with 90% of the exciting, attacking football that was served up to us throughout last season. There were a few disappointing results and full credit to some of our opposition for scoring some very good strikes against us. Goals scored against us were mainly due to quick breakaways, plus corner kicks and free kicks. These were our weaknesses in defence and they turned out to be of major concern to Rangers overall.

The squad is starting to take place for the opening of the new 2016-17 season and hopefully a tall centre-back (no less than 6’ 3” please) & a proper tried and tested striker are still to be added.

Wes Foderingham will probably start the season, unless we can sign a goalie taller & better, to dominate the cross balls, especially at free kicks & corners against us.

Matt Gilks, 34-year-old ex Burnley and Scotland international goalkeeper, is at Murray Park for talks to join the ever-growing Rangers first team squad to try to win the Premiership at the first time of asking – which will be no mean feat, with Celtic having a five-year-start over us. Let’s hope that the Rochdale-born stopper can make a difference to the team if he manages to displace Wes in goals.

James Tavernier, our attacking English right back, really packs a great shot and he certainly has an eye for goal scoring. He is not a particularly good defender, but he was a huge asset last year going forward, and at only 24, he will continue to improve.

Rob Kiernan got better as the season progressed and held down a regular starting place last year. A fast learning centre half who is only 25 and still has the best years of his career ahead of him.

Danny Wilson first played in the Rangers first team at only 17 and did not look out of place alongside David Weir. He did so well that Liverpool paid around £2m for his services, but at a young age he failed to become a first team regular. He signed for Hearts and ended up winning the Championship as their captain. It says a lot for him that he chose to join David Weir again at Rangers last year, when he could have easily just stayed and played in the Scottish Premiership with Hearts. I am not convinced it has worked out especially well for Rangers or Danny, but at 24 he may come back stronger next year, or he will lose his place in the new starting line-up.

New signing Clint Hill, the 37-year-old, ex Queens Park Rangers centre half with English Premier League and Championship experience, is perhaps the strangest English signing so far. He comes very highly recommended by Joey Barton who has played with Clint and knows him extremely well. He rates him as a quality defender who is a leader of men and a very fit player who always gives 100% in every game.
Seemingly, he will put his head where some people wouldn’t put their boots and he never flinches in a tackle.

Lee Wallace, our loyal Captain and our Player of the Year for season 2015-16, chipped in with a surprising amount of goals last season. He also proved to me that Gordon Strachan needs glasses or brains. How can you leave out the outstanding left back in Scotland from a poor Scotland team – the only home-country team who didn’t qualify for Euro 2016?

Niko Kranjcar the 31-year-old, classy 82-times-capped Croatian left-sided midfielder, is Rangers’ latest recruit, with a deal agreed with the gifted playmaker on a two-year Rangers contract. Mark Warburton flew personally to America last month to open talks with Niko who was starring for the New York Cosmos after leaving Dynamo Kiev. Mark was confident of securing Kranjcar’s return to British football, where he had enjoyed three successful spells playing under Harry Redknapp at Portsmouth, Queens Park Rangers and Tottenham Hotspur, all in the English Premier League.

Matt Crooks, our new 6’ 4” January signing from Accrington Stanley, can play either as a centre half or as a holding defensive midfielder. Another English player willing to come and play in Scotland thanks to the success of our brilliant management team persuading them to buy into their new Rangers project. At only 22 he has a lot of first team experience under his belt already. He also adds much needed height to our new side.

Josh Windass comes very highly recommended as an attacking midfield player by Mark Warburton and that is good enough for me. He is fast, and can glide past the opposition with ease and seems to score in every second game he plays in. I can’t wait to see him be a big success with us.

Joey Barton should walk into our new-look midfield and hopefully dominate most games for us. A highly driven and motivated individual who can certainly play the game to a very high standard. I hope he is a revelation in our team as he also has a tendency to get stuck in. He will undoubtedly pick up the odd booking from our inferior referees in Scotland.

Andy Halliday, our very own local Rangers man, has impressed everyone with his talent, coupled with his aggression and total enthusiasm for the game. His biggest asset for next year might be his adaptability to play in many positions in the team.

Jason Holt cost only £65,000 and was another bargain buy for Rangers. What a wonderful piece of business by the boss. Energetic, highly talented midfield player who makes things work for the team and is usually in the right place at the right time. You cannot teach players how to find space and score. You either have that ability or you don’t.

Jordan Rossiter is only 19 years-old and is a current youth international player who has featured at every level for England since he was only 15. He also played in midfield for Liverpool in five first team games, before signing for Rangers on Friday 13 May 2016 on a 4-year contract, taking his services with the Ibrox side up to May ’20. A truly talented young player who reads the game exceptionally well, can see and make the pass and is not afraid to tackle – sounds just right for our Rangers fans!

Harry Forrester was another very shrewd signing who has turned into a star player already with his brand of football and goals contributing so much to winning the Championship. Another English player with experience at a higher level and it shows.

Martyn Waghorn was possibly favourite for the Player of the Year award until his injury. The 26-year-old English player accumulated a spectacular amount of goals and his overall contribution to the team should never be underestimated. I can’t help feel that Martyn could be turned into an international class midfielder, if he was played as an attacking midfielder who would still score goals from that position. He is a very strong boy who possesses a bit of a dig and he can always see and make the right pass to play. I can really see him as a Paul Scholes type of player.

Barry McKay was a revelation last term and forced his way into the Scotland team due to his success with Rangers. With the utterly useless Ally McCoist as manager, Barry could hardly get a game in the lower divisions, mainly due to pointless long high balls to nobody in every game. He won our Young Player of the Year, and he is still only 21. His first touch and dribbling skills coupled with his understanding with Lee Wallace are really special features in this Rangers team.

Michael O’Halloran signed from St Johnstone in January, has still to fully settle into the team. He has pace and he can play anywhere in the forward line. Just the type of signing the Magic Hat likes, and at 25 is the right age to develop into a top class Ibrox star.

Kenny Miller was the surprise success of last season, and a revelation at 36 producing some superb displays throughout the year. He has also chipped in with some great goals and assists. He is helping to coach and influence the younger players in the squad and also with the under 20’s team.

The 19 above players would not embarrass Rangers, but if we buy 2 or 3 real quality experienced players who could walk into the team because of their talent, what a difference that would make.

I would also take 2 or 3 top quality loan deals with players capable of getting into the team next year, as Mark Warburton and David Weir have proven that they can be trusted to use these young players if they show they deserve to be first pick material.