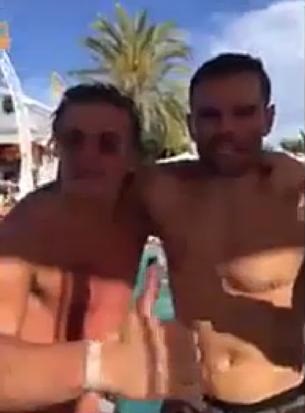 On the face of it, a lad on holiday dunking a fellow youth in a swimming pool would be a completely normal act to carry on overseas in sunny climes during one’s ‘vacation’.

Indeed, it is part of the fun of holidaying, the ‘banter’ young lads get up to, the kind of japes included as rites of passaging as one grows up.

Unless, of course, it is a Rangers fan involved.

As we know, season 2014/2015 saw Rangers’ captain Lee McCulloch hit by a brolly by a Motherwell ‘fan’, not once, but twice, as he attempted to retrieve the ball. Scottish football’s reaction was to dismiss it as either funny, not an act of aggression, or to plain applaud the fan for it.

That match was followed by a home pitch invasion which saw Bilel Mohsni cast as the villain for daring to defend himself when Motherwell’s Lee Erwin slammed him in the back. The fan invasion itself was glossed over almost entirely, and the press nearly exclusively focused on Mohsni.

At Hampden, hordes of Hibs yobs assaulted Rangers players, staff and fans, and full-blown attacks were witnessed by all and sundry. Scottish football either called it ‘exuberance’ or outright denied anything malevolent took place.

It is beyond laughable I am actually even writing this article – the stinking hypocrisy in Scottish football and convenient double standards to demonise and dehumanise everything Rangers and defend anything that is not is now beyond a joke.

That a Rangers fan gets castigated back home by opposition for indulging in a jape with Cummings and sees a petition started to punish him is something quite beyond the pale. Sure, there is an element of humour in the comments (at least I hope there is) in said petition, but do people really not have anything better to do?

The most worrying fact of all this is how seriously this was taken – by a Celtic or any other fan on a Rangers player it would have been laughed off by all and sundry for the bit of humour and fun it was. But because it was a Rangers fan?

The Evening Times are dross at best but to actually run the story on any level shows how low they have sunk in terms of journalism. Admittedly they took a more fun angle on it, but nevertheless it is depressing to see how angry some opposition fans are over this, and how some actually view it as an assault.

If Rangers so much as sneeze in the wrong direction, it is viewed as news and punishable; and that is very grim.