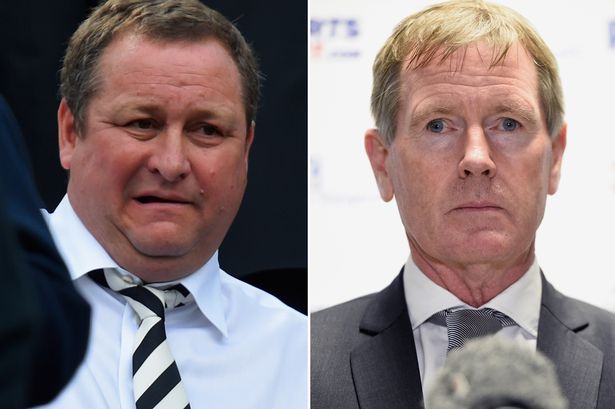 Over the past 48 hours the war over Rangers’ Retail escalated when major shareholder Mike Ashley, executive deputy chairman and founder of Sports Direct, managed to squeeze another director onto Rangers’ merchandise channel’s board.

Nigel Conway joins Justin Barnes and Cameron Olsen on Ashley’s payroll at Ibrox, with supporters getting increasingly frustrated at the struggle to get the Newcastle owner to completely back away from their Club.

Frankly, this whole soap opera has gone on for far too long, and for every blow Rangers, and particularly, chairman Dave King has successfully landed on the tycoon, this latest move suggests the businessman has no intention of exiting from Ibrox any time soon.

Rangers did successfully sever ties with Sports Direct, ripping up the contract which ceded intellectual property to the retailer, meaning a formal end to the partnership and Ashley’s loss of clout over Rangers’ crest and copyright.

But, alas, for all the progress made to rid Rangers of this menace, he still controls Rangers Retail and pockets every penny it generates. For every Rangers shirt or official mug sold, that cash goes straight into Mike Ashley or his company’s wallet, and Rangers see a miniscule amount into their coffers.

Where do Rangers go from here? After all the victories in court, even an indirect one with Ashley being slaughtered by a select committee at Westminster, he nevertheless still controls what he wants to and owns a dominant amount of shares.

While he can no longer use Rangers’ logos or any other imagery, he still ends up with the fat of the land from it, and that is worrying. With this appointment to his Retail board at Ibrox, he shows no signs of disappearing – if anything it is a defiant act designed to show that whatever King does, he has a rebuttal.

End of the day, the contract with SD was for seven years – that applied blanket, to every aspect of it, and while certain ones have now been terminated, unless King, Murray et al can find the legal loophole to break Ashley’s stranglehold on the revenue from RR, the sad (necessary?) boycott of official shirts by a large portion of the fanbase will go on.

Rangers fans want to put their cash in the club. In youth. In upgrades to Ibrox. In improvements to the facilities. In anything which helps the club grow. Ergo if buying merchandise is currently at odds with this, the stalemate will continue.

Ashley sees Rangers as an easy cash cow. Yes, he put loans in which did keep Rangers ticking over during a dark time of low funding, but the man did not do it out of the kindness of his heart; there was an agenda, an end game, ulterior motives abound. And evidently, with where we are now, it is pretty clear what those intentions were.

Where we go from here is anyone’s guess – the hope is King and co can figure out some legal angle to completely suffocate Ashley out of Govan – but unfortunately, I am not holding my breath for it.