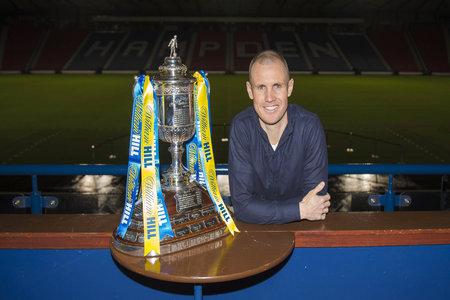 Mark Warburton will attempt to guide Rangers to a 34th Scottish Cup victory this Saturday with Alan Stubbs’ Hibs the only thing standing in our way of a swift return to European football after our demotion in 2012. The Championship and Petrofac Cup were our bread and butter this season, with most fans expecting us to claim both trophies without too much of a challenge. However, it is a testament to the remarkable job that Warburton has done that we are on the verge of clinching Scotland’s most prestigious cup competition as well as European nights at Ibrox being a realistic thing in the near future.

There is no living Hibs fan that has seen their team win the Scottish Cup, and the green half of Edinburgh are hoping to see the Hibees lift the trophy for the first time since 1903. The reality is, though, that regardless of which Hibs side turn up, Warburton’s men are more than capable of seeing off any Scottish outfit on their day – as proven in the semis when we controlled the game vs Celtic. This means, however, that whichever Rangers team turns up will be key in determining who lifts the cup.

Will we turn up like we did against Dundee and Celtic, and like we played against Hibs at Ibrox shortly after Christmas? Or will we still have a hangover from our gruelling end to the league campaign, which was dreadful despite the fact we had already clinched the Championship title?

On the face of it, our record against Hibs this season (Won 3, lost 2) suggests that this game could go either way. However when you look at the nitty gritty, it could so very easily have been 5 wins had luck gone our way in the 2-1 defeat at Easter road. Furthermore, the 3-2 defeat was the personification of our poor post-league win attitude and could so easily have been a potential 5th win had we made more of a competitive affair out of it. This is far from excuse making, it is just a simple fact that we have been head and shoulders above the Edinburgh outfit this season.

Both teams have a good eye for goal, and defending is the strong point of neither which should make for an entertaining cup tie. Of course, we know that we are capable of some astute defending as we saw in the majority of the semi-final. Kiernan and Wilson oozed class that day with the only defensive lapse coming in the form of slack tracking back from Nicky Law – who is doubtful to feature this Saturday and almost certainly won’t be a Rangers player for the 16/17 season.

If that same defence turn up on Saturday, Scintillating (don’t laugh!) Stokesy will be in for a tough day leading the line for Hibs. They do have a decent midfield, but yet again we showed against Celtic that we are capable of controlling any game and finally it goes without saying that the Hibs defence is, how do I put it nicely, susceptible to the odd error… Hibs are literally famous just now for conceding silly and late goals which costs themselves vital matches and I would expect further misery to be piled on Alan Stubbs’ men at Hampden on Saturday.

The afternoon will be an interesting one for one Jason Cummings. There is growing talk that we are interested in signing him, so if this is true then will he be at his best knowing that any goal he scores may deny his future employers the chance of European football? That is only a nice little aside, as in my opinion we will win the game regardless of which attitude young Cummings chooses to parade.

Anyway, it’s not about Hibs. It is about The Rangers, I am going to go for a 3-1 victory in 90 minutes. A Miller hat-trick, wouldn’t that be fabulous?

Leave your predictions below.