Home Rangers The defenders who could be the future of Rangers 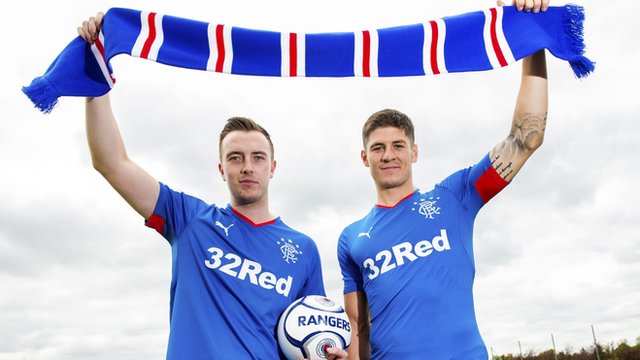 When
Dave King and the rest of the board, contracted the new management team
of the very talented Mark Warburton and David Weir for Rangers on the
15 June 2015, it was an outstanding piece of business. Admittedly, there
was an element of gamble involved when Brentford let the two of them
go, but Mark and David have proven to be a major success by signing so
many young, good, keen players, who play wonderful attacking football.

Their
first signing was Danny Wilson, a left-sided centre back, within seven
days of taking over. They believed that by securing his services from
Hearts on a free transfer, on 22 June 2015, he would become the
cornerstone of the Rangers defence for years to come. To sign a possible
future captain of Rangers on a free was seen as a major coup, and he
was a player with something still to prove, so it seemed to be a
no-brainer signing for him and Rangers. Unfortunately, I think it should
and could have worked out a bit better than it has. Is it as big a
success as nearly every Bluenose hoped for?

David Weir played beside him for Rangers, during season 2009 – 10, with Danny
playing
25 first team games at only 17 years old. He has also played five games
for Scotland, and even managed to score a goal on his debut game
against the Faroe Islands. He also played numerous times for Scotland at
Under 17, 19’s and under 21 level. First impressions must mean a lot to
David, when he was so keen to work with this accomplished defender
again.

Another player to sign the same day as Danny was Rob
Kiernan and who turned out to be his regular centre back partner for
Rangers. He was another very astute free transfer, with Rob signing a
two-year deal that saw him feature in 44 games in his first season at
Ibrox and loving life in Scotland. He started the 2014-15 season with
Wigan Athletic in the English Championship and played 18 games before a
loan deal took him to play for Birmingham from Feb to Apr, 15, and he
played in 12 games until the end of the season. When Mark Warburton
wanted him for Rangers, he was absolutely thrilled, and felt it was such
a great honour to play for a world-record breaking team with the
stature of Rangers, a side he knew all about.

Danny came through
the youth team at Rangers and captained the under-19 team. He was tipped
early on to have a big future at Ibrox and being compared to Liverpool
legend, Alan Hansen for a long term career as a ball-playing centre
half. He became the youngest Rangers player to play in a Champions
League game in Romania on Wed 4 Nov 09 aged just 17 years, 312 days.

The
feeling is that he signed for Liverpool too early in his career and on
21 July 2010, he signed a three-year deal for an initial transfer fee of
£2 million, rising to £5 million based on appearances. Danny still
states that he doesn’t have any regrets about joining Liverpool and
insists it made him a better player.
At only twenty-four,
and now a highly experienced player, Danny Wilson should have proved to
be a real stalwart in the heart of the Rangers defence this year, but is
this really the case? I truly would love to see him fulfil all his huge
potential and I was delighted that he stepped up a gear against Celtic
in the semi-final of the Scottish Cup. If he plays like that every week
next season, it would be great, because he certainly has the ability to
succeed at Rangers.

For two free transfer signings, the two
centre backs Danny Wilson and Rob Kiernan deserve so much credit for
helping Rangers to return to the Premier League, in their first season
playing together.

And quite honestly, if Danny Wilson and Rob
Kiernan defend as well as they did against Celtic, it should be too
difficult for Hibernian to lift the Scottish Cup on Saturday.