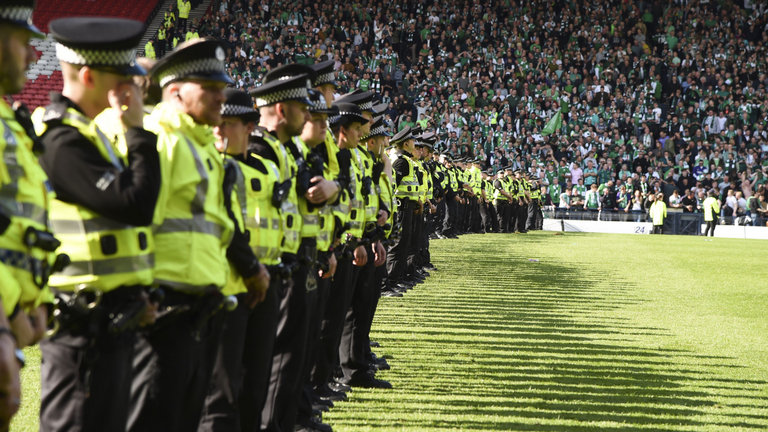 Rangers lost a cup final today. This was naturally extremely disappointing in many ways, but after the final whistle blew it became an irrelevance as the hate in Scottish football towards Rangers manifested itself in an unspeakable, ugly, sickening, and frankly frightening manner as thousands of Hibs ‘fans’ invaded the pitch and attacked Rangers players and staff.

At least six Rangers players were assaulted to varying degrees, including Rob Kiernan, Jason Holt, Andy Halliday, Lee Wallace and Dean Shiels, along with staff members such as David Weir.

To describe this state of affairs as a new low for this cesspit of poison north of the border we call Scottish football is nowhere near doing it justice.

To watch videos by journalists such as Peter Adam Smith, sitting there recording the vile events unfold ahead of him, sounding audibly scared as he described the pugilistic conflict scattering the pitch has signalled a genuinely disturbing direction for Scotland.

If we remember last season’s play off final, Motherwell also carried out a pitch invasion on beating Rangers – it took two months for any investigation to take place, and even then the repercussions were meaningless. However, during that match Rangers’ then-captain Lee McCulloch was attacked by a ‘fan’ with an umbrella/flag stick. He hit him twice.

This action was dismissed by Scottish football as either funny or ‘not serious’ – either fans from opposing teams enjoyed watching Jig being hit, or they saw it as nothing more than ‘banter’.

That has given consent for any old tom, dick or harry to now carry out assaults on Rangers players and staff because it is essentially ‘fine’. Oh, and it is ‘only Rangers’.

Mark Warburton’s face as he ushered his men hurriedly off the pitch at full time spoke volumes; the man was disgusted and frankly scared at what was taking place around him.

It is understood Dean Shiels was directly attacked by some ‘fan’ and had to be pulled back to avoid it getting uglier. At least the boy was able to defend himself but Rangers’ statement tonight confirming injuries have been sustained by players from these yobs is a sure sign of the bile permeating our game now.

Rangers-hating has become a hobby, and today it spilled over into sheer violence. Bilel Mohsni famously punched Lee Irwin, and was castigated for it – but it must not be forgotten he had been slammed from behind by the Motherwell man, so was effectively defending himself. That was a sample, a glimpse into the future of the mentality of what the loathing of Rangers has done to Scottish football.

Criminal investigations are now underway but a commonly mooted notion is that if it had been Rangers fans last year or today guilty of this level of abhorrent activity, it would have been splashed over the press as the only story of the day. As it is, it is merely one.

Scottish football is a shameful midden, one which has lost its way, its morals and its sense of morality. When Slim Jim died, there was respect for him from Celtic fans at Ibrox by holding a banner to his memory. That was appreciated and respected.

That common humanity is gone from Scotland, and it is a damn shame.