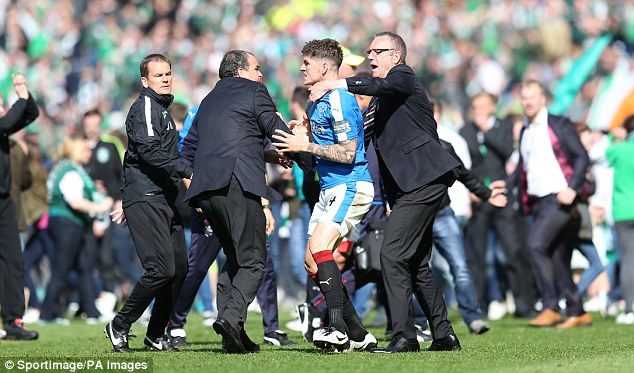 After the atrocities at Hampden last weekend where a horde of Hibernian ‘fans’ stormed the pitch, attacked Rangers players and staff and goaded rival fans, it is safe to say something of a hive has been stirred in Scottish football.

From the majority of fans in this bitter little hole trying to pin the blame on Rangers fans playing the victim, to everyone of an Ibrox persuasion rightly defending themselves against the ridiculous provocation this entails, it is safe to say a new bitterness has enveloped the game that was already saturated in arsenic.

The media have especially stirred the hate surrounding these calamitous events of nine-days past; from the Sun referring to the Hibs’ yobs as ‘fans’ who Rangers fans ‘retaliated’ against mere ‘goading’, to the Daily Record and Jane Hamilton’s remarkable flights of fantasy blaming the lethargic police response on Rangers fans deliberately blocking Strathclyde’s finest from accessing Hampden properly, we have had some ugly lies and falsehoods circling around this distasteful set of affairs within the Scottish press.

However, the Record’s Gordon Waddell went one step further over the weekend; he managed to blame Rob Kiernan and Andy Halliday for what Hibs fans did.

Despite everything we know, everything we have seen, all the evidence; Waddell pinned the blame on Kiernan and Halliday by saying Halliday kicked back and Kiernan ‘went back for more’. Beyond the staggering connotations here (that grown men should let themselves be attacked without any sense of self preservation) is the simple fact that the message this sends is to justify what Hibs yobs did.

Yes, Waddell conceded that their fans should never have done what they did, in storming the pitch and causing mayhem, but to then administer responsibility to Rangers players for being hit and wanting to defend themselves is a new level of gutter tabloidism and immoral opinion masquerading as ‘journalism’.

It is a new level of sick PC that argues that professionals should not hit back if assaulted – that they have some kind of responsibility to ethics if they so much as dare lift a finger when being attacked.

It must not be forgotten that Halliday himself was being protected by referee Steven McLean and his brave assistants, along with Bobby Madden who chased after another Hibs thug; ergo to pin blame on these people for surviving is something beyond the pale.

These guys, players, staff and officials alike, did what they had to to avoid anything truly nasty from materialising (as what did happen was not nasty enough).

They deserve praise for not beating their assailants up, frankly, rather than condemnation for daring to hit back.

I wonder if these journalists’ families would be happy seeing others condemn them if they defended themselves and their loved ones against a gang of Neanderthals.