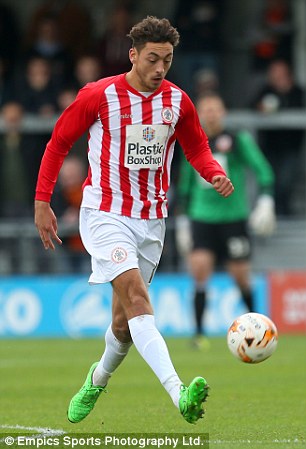 At only 22, new Rangers’ signing Matt Crooks is 6’ tall and can either play at centre back, or as a holding midfield player, but personally, he is not tall enough for me to play at centre half for Rangers in the Scottish Premiership, but fine to play in midfield for us. If, that is, he is good enough to hold down a starting place in our new look 2015-16 team.

When Matt was with Huddersfield, he went on loan to Accrington Stanley as a 20 year-old and made eight appearances for them before being called back to his parent club.  Accrington Stanley finally signed Matt as a free agent on an 18-month contract in October 2014, taking him up to the summer of 2016.

He has played in so many different positions throughout his young years, as he is a very versatile player as a defender, in midfield, a right winger and a striker. His manager John Coleman said:

“I think he gives us strength, as he can play in a lot of positions and I’m delighted with this signing. Sometimes you can be a victim of your own versatility and Matt’s keen not to do that.”

In 2014-15, Matt started the season with Huddersfield in the Championship before joining up with Accrington Stanley who play in League Two and he played in 22 games for them in his first season, at only 21.

So far this season Matt has played in 35 games and scored 8 goals until Sat. 25 March, when he picked up a bad ankle injury, which eventually led to him having an operation to sort the problem out. After successful surgery to his ankle, he is currently on the road to recovery, just in time to start pre-season training with his new team-mates at Rangers.

Playing in the at times rough English League Two, Matt has amassed plenty of bookings and this lets us know that he likes a tackle and is prepared to get stuck in, which should really please us Rangers supporters. I have to say that if he gets booked 12 times, which is one in every three games, down in England, what amount can we expect him to achieve up here with our inferior referees, who in general don’t really understand the art of tackling? Most refs believe that going in hard but fair is a foul and usually blow their whistle accordingly, upsetting both the players and their managers alike.

Most managers’ bookings, which inevitably lead to them being sent to the stand, are due 99% of the time because the referee has called it all wrong, and then made everything worse when people crack up with temper because of the ref’s incompetence in the first place.

I am sure that Mark Warburton and David Weir will warn Matt that it is not clever to pick up too many bookings which quickly leads to suspensions with the totting up system currently being used in the Premier League, where the standard of refereeing is absolutely appalling. If you celebrate a goal too much, they can book you, as happened to Andy Halliday, earlier in the season.

Matt may have to alter his game slightly to adapt to our referees, but with his overall talent, this extremely versatile player should have no problem playing in a young attacking team who can dominate most games they play in. I for one am looking forward to seeing him proud to wear the colours of Rangers next season.