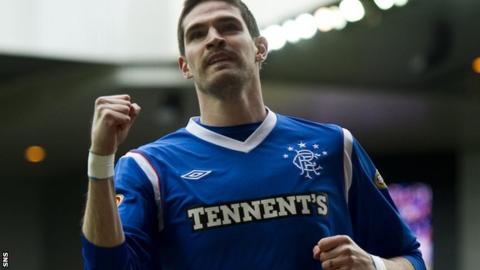 Before last week few would have believed the Joey Barton or indeed Niko Kranjcar stories, but they are real and Rangers are serious. Ergo, short of linking Messi with a move to Govan, it does seem that the previously less believable transfer rumours are now holding a little more water than they once did.

And as such, the latest name to crop up as hitching a ride up from England is Rangers’ ex striker himself, Kyle Lafferty.

Nothing more than hearsay and rumours at this point, the stories around Lafferty suggest the Northern Irish international, completely out of favour at relegated Norwich City, is eager for a move back to Glasgow, supposedly for ‘family’ reasons (he is to be married this summer).

Of course, whether a player of his frame and style (and maturity) would fit with Mark Warburton’s thinking is another question, but in light of the Barton story, the previously implausible can now not be dismissed quite in the way it could before.

Lafferty has been on loan at Birmingham in recent times, with an ill-fated spell in Turkey preceding that, so being married and with his country taking part in July’s European Championships, the 28-year old would certainly look to settle down if he can.

As such, his name is being touted in connection with Rangers.

Whether there is any truth in it is unknown, but it is now folly to completely ignore stories on basis of plausibility.

We will call that the ‘Joey Barton fallacy’.