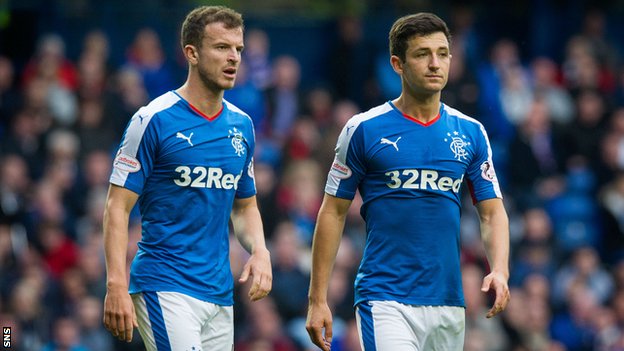 With the absolute glut of signing targets emerging in the past week or so, the vast majority of players Rangers have been linked to are midfielders. From Joey Barton to Niko Kranjcar, from Jordan Rossiter to Alex Pritchard, from Matthew Knox to you name it, Mark Warburton has really gone quite postal when it comes to midfield talent.

Sure, Rangers are also linked with quite a few forwards too; Danny Graham, Jason Cummings and Danny Ings have all been mentioned in the Ibrox breath as well, but it is undeniably midfield which has seen the most activity, which is ironic as it was already arguably the strongest area of the team.

So just why is it that Mark Warburton has gone to extensive lengths to borderline saturate the engine room of the team?

Well, there are three very distinct reasons for this course of action:

Firstly, around four midfielders are on their way out this summer. Arsenal’s Gedion Zelalem has more or less said his goodbyes already, by admitting he is focused now on Arsene Wenger’s side and how determined he is to break through at the Emirates. With Mikel Arteta and Tomas Rosicky both quitting this upcoming window, there is certainly room for Zelalem to try to crack Arsenal’s first team. Along with him, Dean Shiels’ time has been numbered for ages, and while he has been a faithful servant, his deal will 99% certainly not be extended; this also applies to Nicky Law, who has had to be content with a place on the bench and few could see him wanting to stay, never mind being offered a new deal. Last but not least, Dominic Ball is almost certainly going back to White Hart Lane. Tottenham are in an excellent place right now, season’s diabolical finish notwithstanding, and Mauricio Pochettino’s men have Champions League football guaranteed next season. Ball gave Rangers a lot this season and few would begrudge him a shot at Spurs’ first XI.

Secondly, it comes as no coincidence that some of Rangers’ best defensive displays have been at a higher level against the likes of Dundee and Celtic – and during those matches the midfield was especially impressive, with Halliday having a particularly mammoth match against the East End’s finest. The better Rangers’ midfield is, the more efficiently the defence can function; and messyrs Kiernan and Wilson have produced their most impressive work against the best opposition when the midfield in front of them was on form. In short, Mark Warburton wants to enhance that midfield further for the step up, especially introducing a proper defensive midfielder in order to properly prepare the backline for life at a higher level.

Lastly, relating to the second portion, without any doubt the most inaccurate cliché in the book is that all great teams are built around their defence. Look at Barcelona, Bayern Munchen and Real Madrid – none of these teams’ defences are impressive, especially the Catalonians. But they have dominated European football for a decade or more. No, the most important area of the team is midfield; case in point is the current and embarrassing AC Milan side. The defence is quite robust, with Alex and Romagnoli a good partnership in the middle, flanked by Italy internationals Abate and Antonelli, while attack has Colombian international Carlos Bacca and Brazil’s Luiz Adriano, not to mention France’s Jeremy Menez and the enigmatic Mario Balotelli. But the midfield is filled with rot – absolute trash by the traditional levels of a club more used to Seedorf or Kaka than Honda and Bertolacci. Ergo, the Rossoneri are nowhere. By bringing in a glut of quality midfielders to Ibrox, not only to replace those outgoing but to simply make that area stronger, it will help other areas such as aforementioned defence and certainly attack too. Mark Warburton knows what he is doing.

Times are good at Rangers.