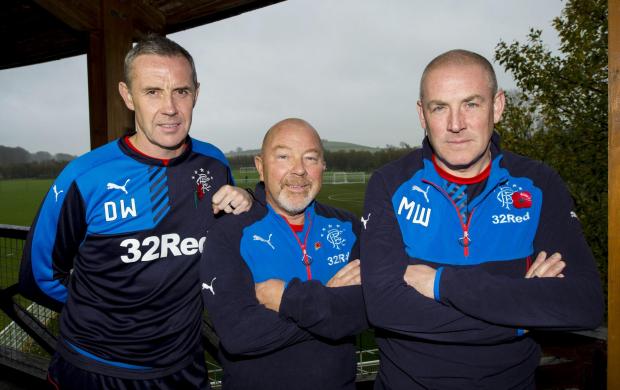 Three men have changed the face of Rangers, of Scottish football. The board laid the foundations, business-wise, but these three men on the footballing side have resurrected the institution. Let us take a look at them in turn.

Mark Warburton, our magic manager of Rangers F. C. has been a magnificent success since joining us in June 2015.

His own football career started as a youth player at Leicester City where former Ibrox hero Jock Wallace was his manager, before moving on to Enfield where his career was curtailed by a cruciate knee injury.

He became a currency trader in London and coached a variety of youth and school teams on a part-time basis and quickly realised he had a real talent for coaching, and wanted to get back into football on a permanent contract. His plan was to travel around Europe studying coaching sessions at a number of top clubs. He learned so much from the best teams and managers in football, that it enabled him to be a big success, whenever, and where he got the right job.

He finally got a start with Watford’s youth academy, until he departed in 2010, before becoming the First Team Coach at Brentford. Then he was promoted to Sporting Director, before taking on the manager’s job in December 2013, when Uwe Rösler left to join Wigan. His first move as manager was to appoint David Weir as his assistant, and the pair led Brentford to the Championship thanks to a second-place finish in League One with a total of 94 points.

They finished a very respectable 5th place in their first season of the Championship in 2015, and got into the play-offs before being eliminated by Middlesbrough, and it proved to be Mark’s last game in charge of Brentford.

“It’s a tremendous privilege, an honour, a club of this history and tradition. You walk around the ground and the stadium, the first time for me this morning, and you smell the history. It really is an honour.”

Then we have his assistant, David Weir, a major part of our management team at Rangers F. C. since re-joining us in June 2015.

Initially signed on a short-term deal at the age of 36 in January 2007, Weir ended up spending five glorious years at Rangers and is now the club’s second in command. In season 07/08, he played an incredible total of 66 matches as Rangers reached the UEFA Cup Final and won the Scottish Cup and League Cup, as well as featuring five times for Scotland as the Dark Blues came agonisingly close to qualifying for Euro 2008.

David Weir left Rangers in January 2012 to take up a coaching and playing role with Everton’s reserve side and spent 18 months in that position. In the summer of 2013, he was offered the manager’s job at Sheffield United, who played in League One. It was too good an offer to turn down, but it didn’t last too long. Despite playing some superb football, the results weren’t good enough, and he left by mutual consent in October 2013.

Two months later, he teamed up with Mark Warburton at Brentford, but his links with Rangers remained strong, and he was officially inducted into the club’s Hall of Fame in April 2014. In 2015, after weeks of speculation, Weir was named assistant manager to Warburton at Rangers, and they have taken us back to where we belong – the Scottish Premiership League – where we will be competing with Celtic, Aberdeen & Hearts for all the top honours.

Last but not least, Frank McParland, our Head of Recruitment and Chief Scout, is a 56 year-old Englishman with great knowledge of the lower English leagues, where on occasions you can find Golden Nuggets (football players who can become top players if they are given the proper coaching with the right management team behind them, and the type of football the team play). Barry McKay, is an excellent example of this. Give him the ball at his feet and watch him play, but don’t ask him to challenge right back in the air to win headers or to win 50/50 balls with slack passes to him.

A boyhood Liverpool fan, McParland enjoyed two spells on the red half of Merseyside.  He worked firstly as Chief Scout between 2003 and 2007. He has also worked as Sporting Director at Burnley, and has gained a wealth of experience at various clubs over an impressive career. He was the Director of Football at Watford between 2008 and 2009. He was asked back to Liverpool in 2009, and is credited with unearthing Raheem Sterling and Jordan Ibe in his second spell when working as Director of Academy and Player Development from 2009 to 2013.

He has previously worked alongside Mark Warburton, as Director of Football at Brentford before leaving London at the same time as the current Rangers manager during the summer of 2015. McParland is the latest appointment to be made at Rangers as the club strives to modernise, move forward and return to the highest echelons of the game.

New benchmarks and standards must be set both on and off the field of play, and our Management team and background staff are the ones that will make sure it is all a success. We are extremely lucky to have this quality of talent at Rangers Football Club.