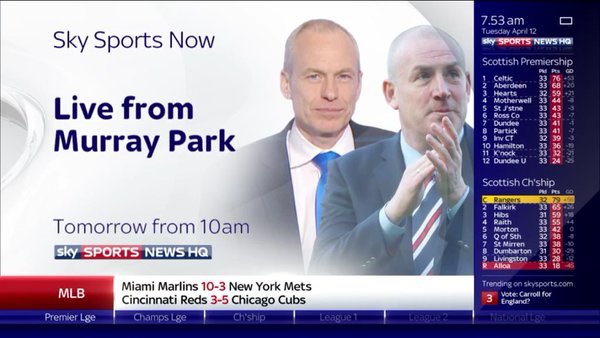 Sky Sports News Now will today be live from Murray Park, in a first for Scottish football.

In an unprecedented move north of the border, Sky Sports’ Rob Wotton will host a special feature at 10AM live from Auchenhowie, showcasing Rangers’ facilities and world class training ground and discussing promotion.

It is a further indication of just how important Rangers’ return to the top flight actually is, not only for Scottish football, but football in general as one of the world’s oldest Clubs returns to where it belongs in the Scottish top flight.

The media attention globally upon Rangers since promotion was clinched has been amplified massively, with international outlets taking close interest in events at Murray Park since Rangers seized the Championship last week.

You can catch the feature on SSN at 10AM on Sky Channel 401 and Virgin Media 501. Unfortunately it is unavailable on free to air TV.