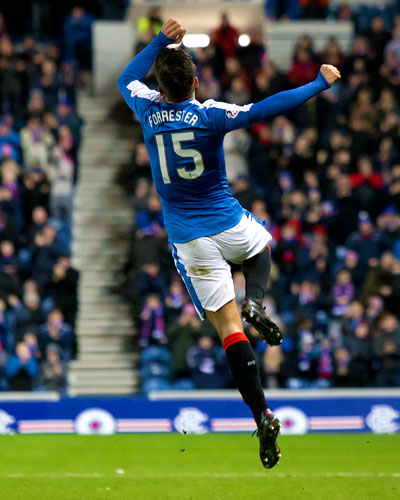 It probably would not be completely unfair to suggest Rangers fans were not immediately won over by January signing Harry Forrester. The 25-year old winger has had a decent career, with spells at Aston Villa, Brentford and Kilmarnock on his resume, but unfortunately he has never truly exerted himself with consistency despite showing many glimpses of the quality he has.

Fans of Doncaster Rovers, his last club before he arrived at Ibrox, were sad to see him leave but admitted it generally had not worked out for the attacker, and while he had flirted with being a great player at the Keepmoat Stadium, sadly for the Englishman he overall had not quite delivered there, opening the door to a move.

That move was to Rangers, on an initial six-month deal, as a pseudo-trial to see if he would stay beyond the summer.

And early signs did not really reveal a great deal about him – he appeared enthusiastic, energetic, but was clearly guilty of trying a little too hard in the early days and failed to deliver a lot of end product, with many a goal chance wasted.

That all changed dramatically when he scored a beautiful dipping curler against St Mirren to seal the winner late on, a goal which sparked jubilant celebrations and brought home another three points when such a feat looked unlikely.

The remarkable confidence that goal instilled in him has completely transformed him – not only is he looking full of life, energy, skill, power and pace, but he is now scoring consistently; the following match versus Raith Rovers saw him open the scoring with another wonderful curling strike, one which floated in near-slow motion into the back of the net, before he came off in the second half to rapturous applause, having put in his best shift yet.

But even better was to come; that 15-second opener against Dundee was just a ridiculous goal; a solo mazy run beating two or three defenders before hammering the ball into the roof of the net from an acute angle summed up the belief he now had in himself and the selection problem Mark Warburton will be delighted to have.

Rovers fans now find themselves anguished seeing how well the flanker is playing at Ibrox and the dominant wingplay he is now delivering, not to mention those goals, and it must be said that if he keeps it up he might finally realise the potential his career has been threatening to deliver for so long.

In the past three matches Harry Forrester has just gotten better and better – and he has a legitimate case to be considered a regular starter. The problem is, who drops out?!

Problem? The kind of selection headache a club like Rangers deserves.