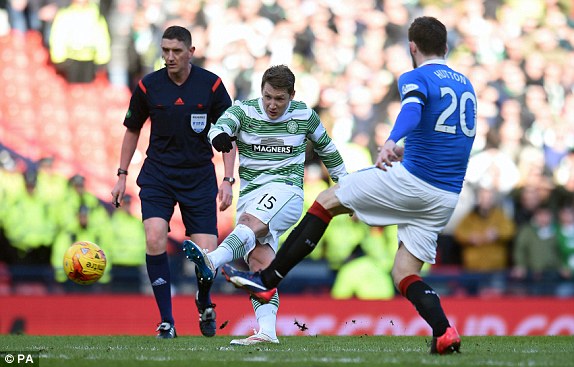 SFA chief Alan McRae announcing the semi final draw in as succinct a manner as we have come to expect from the country’s bungling executives, but the real attraction of this one was finding out if Rangers would draw Celtic like they did early last year.

And yes, they did. It was written in the stars. After Celtic fans apparently got lost on their way to Parkhead, they find themselves facing a Rangers side suddenly believing in themselves, that they can compete with and beat the best sides in the land following the absolute demolition of Dundee yesterday.

The last time Rangers faced Celtic, the match was frankly a drab affair. Kenny McDowall’s men were abject, and while Ronny Deila’s side was not exactly Barcelona either, it found little difficulty in dispatching Rangers who personified ‘limp’.

This time the Norwegian will come up against a much stronger Rangers, one which is hoisted high at the summit of the Championship and has regained form again following a mild post-new year lull in February. Meanwhile, his own team is in dismal form, with two consecutive draws in the Premiership to scratch his head over.

Since destroying them at Ibrox in April 2012, Rangers are in their best shape in almost four years to beat Celtic again. The last Old Firm match was a tame affair at Hampden and Celtic were easy winners – they will not expect the same level of insipid opponent this time, and they well know it.

If Rangers play to the kind of level they showed against the Dee, they will certainly push Celtic all the way. We must not trivialise an Old Firm occasion by dismissing our opponent – Celtic will be up for this – they have ached for Rangers for years, and it will mean the world for their fans to beat us again – the players will feel that too, so do not expect a tired and uninspired Celtic at Hampden.

But equally Rangers are a different animal to the weak lamb we were 18 months ago – one that has bite, claws, and can hurt anyone. And we want revenge. We deserve revenge.

And finally, we have a team and manager capable of delivering it.