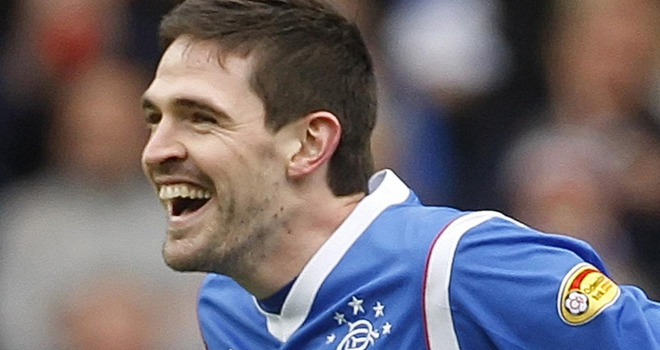 In 2012, as is all-too-notoriously remembered, effectively Rangers’ entire first-team squad thereabouts abandoned the Club in its hour of need. That infamous press conference with Steven Naismith & Steven Whittaker, the refusals to TUPE and get Rangers some desperately-needed money; these all added up to an unforgettably sour experience and left those deserters as some of the villains of the piece.

Rest assured, Rangers fans did not completely object to their best players leaving under the circumstances of a drop to the Third Division, it was the refusal of a number of them, nay, most of them to transfer their deals over so Rangers could at least get a transfer fee.

But these were the exception – guys like Whittaker, McGregor, Naismith and, significant to recent times, Kyle Lafferty, just walked away despite the fees Rangers had originally paid for them (McGregor excepted).

Now we see the Northern Irish international is inviting the future possibility of rejoining Rangers. Oh, NOW he is!

So, basically when Norwich freeze him out, his career stalls, and Rangers are growing and growing and getting in a very good place these days sitting on the verge of a return to the Premiership and Lafferty thinks to himself ‘I’ll have a bit of that’.

And this should apply to all those who left without Rangers getting a dime for them. All those who left in Rangers’ hour of need – there is no way Rangers should accept their begging bowl and put something in it.

Four years on, those wounds will never heal. And even if they get close to doing so, the scars underneath will always remind us of the damage and hell we went through.

So for some of the players who caused that pain to suggest they would like to return? Absolutely zero chance – beyond the simple fact that returning ex-players often does not work is the simple moral stance of what damage was done to the Club by these guys.

Some fans try to be fair and look at it from a football perspective, and say that if they are better than what we have, we should look into it. But I will not entertain that view.

I trust Mark Warburton to deliver – he has proven he can get fine talent at a fraction of the cost we might normally expect. And I trust him to develop new players or sign cost-effective solutions who will grow in time to become as good as the Naismiths, McGregors and Davises of the day.

We can, and are, building a new legacy – we absolutely and utterly do not need to resurrect an old sullied one to succeed.