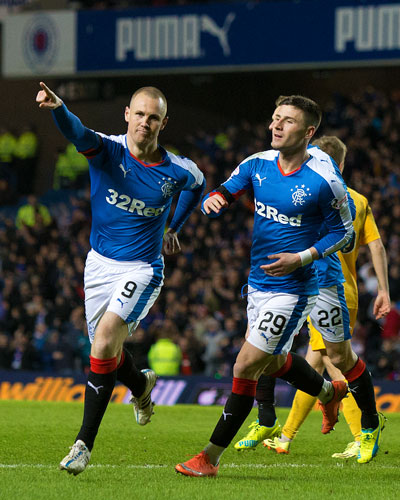 On the face of it, a visit from Morton did not exactly set the tastebuds on fire, with all due respect to the side from Greenock. Following Rangers’ comfortable dispatching of supposedly ‘superior’ Dundee, the Ibrox team’s tail was most definitely up, and the Cappielow-based outfit was not expected to pose any kind of threat.

And indeed, after a stroll of the opening 20 minutes, Rangers looked like sealing an easy win if they could just breach a fairly stubborn visiting defence. Unfortunately, the script went pear-shaped after a loose passage of play saw the guests take advantage of a complete mix-up in defence, and weak goalkeeping, to take the lead in frankly absurd circumstances.

The goal was a mess, and it was the first time Rangers have trailed in any match since Jason Cummings’ clever opener for Hibs almost three months ago.

The heartening response saw Rangers step up their game – rather than looking indecisive, Warburton’s men knew they had a battle on their hands – the rest of the first half was spent increasing the tempo, and pushing forward with more purpose. It led to its reward when James Tavernier’s 43rd-minute corner was classily headed home by the bang in form Kenny Miller.

After the break was just a total walk in the park – two more excellent goals, a second for Miller and a net-busting drive from Wallace sealed the three points and confirmed Rangers are not the kind of team to let adversity beat them these days.

More and more Rangers are gritting out winning displays – sometimes with more style than others – the trip to Killie was far from pretty football, but The Magic Hat’s men got the job done – equally last night was 20 minutes of slight worry for fans as Rangers plucked and picked at Morton in search of the equaliser, but they need not have panicked.

In the end 64% possession and nearly 20 shots at goal reflected a Rangers team who went behind but never felt defeated – and the upsurge in tempo thereafter reiterates this point.

In slightly more disappointing terms, Michael O’Halloran had by far his most subdued night, rarely getting involved and creating little. His lot was summed up by getting both booked and hooked. One for the winger to forget.

But Barrie McKay had another fine match, and Jason Holt’s return to form is most certainly welcome, as was Miller’s outstanding contribution overall. The defence was certainly shaky though, and it is evident the Wilson and Ball partnership is Rangers’ weakest – there appears a lack of understanding and communication between them both.

But these are all minor quibbles – Rangers continue to surge ahead in the league (15 points now) – and are proving themselves worthy champions. The only real domestic tests left are Falkirk and Hibernian away, but that glorious cushion is outstanding insurance – even more liberating is next Friday’s visit to the aforementioned Bairns – victory there, and results in Rangers’ favour, and the gap to second place could be a staggering 18 points.

We will see though – there is still some football left to be played – but Rangers’ noses can feel the tape of the finish line and the Premiership.