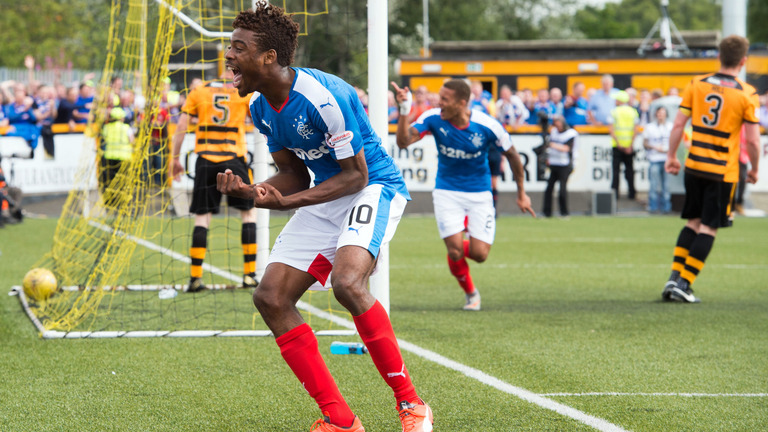 So, as we now know, on-loan Nathan Oduwa has travelled back down south and rejoined Mauricio Pochettino’s Tottenham Hotspur, his time at Ibrox terminated with a slightly blunt statement from the Club informing fans the winger had gone.

There were no thanks, no good luck wishes, just a very unsubtle message that his loan had ended and he had returned to White Hart Lane.

Whether this was a clerical error on the part of the Club, or there was somehow ‘bad blood’ we will probably never know, and while his exit came out of the blue, it was not a departure greeted with a lot of sadness among Rangers fans.

The majority reaction was to thank him for his time at Ibrox and reflect fondly on ‘that’ display v Raith, while wishing him well back in England.

And that general absent of regret rather sums the lad’s time in Scotland up. Whether you attribute his fade from the first team to the hatchet jobs carried out on him by the SPFL’s various assailants or not, the kid just did not cut it up here and did not show sustained evidence that he has what it takes to get to the top of the game.

After the Raith match, we certainly believed otherwise – he was absolutely colossal in that 90 – assisting two goals, and repeatedly humiliating their backline. But a player cannot live on one display for his whole career, and Oduwa failed to replicate that glorious afternoon.

He had fleeting moments, and now and again his talent appeared, but overall his tricks, skill and imagination either deserted him or simply stopped working on Scottish football’s delightful opponents.

There is no question the brutality he suffered first from Kieran Gibbons then Hugo Faria as consented by then-Livi manager Mark Burchill during the cup clash at Ibrox had a part to play – in short, Oduwa was at the receiving end of combat, and not cup football.

He was taken off at half time to stop him being hurt further – and it notably happened again when Falkirk’s Leahy sliced him during the 2-1 defeat.

Yellow cards and no reds – no referee protected him, and that probably played a small part.

But the base truth is Oduwa did not show the fight needed for top-level football. He did not track back much, had little pace, and his shooting was absolutely atrocious. He played like the sport was a game of FIFA, with 70% of his trickery failing. He also had a serious deficit of strength, something crucial for senior football.

Which is not to say he was a total flop – he had talent, ‘has’ talent – he can beat a man, can pick out a pass, and he plays the sport in a good spirit; always has a smile on his face.

But it just did not work for him in Scottish football, and his eventual disappearance from first-team affairs reflects that.

We wish him all the best in England, but unless he improves a great deal of his all-round game, he will struggle to survive in the Premiership at all, never mind succeeding at an EPL giant like Spurs.

But, that is in the hands of Pochettino now.

However, we always like the readers’ views here at Ibroxnoise.co.uk; do you agree with us and think Rangers were right to let him go? Was it the best move? Or would you have kept him? Vote below.