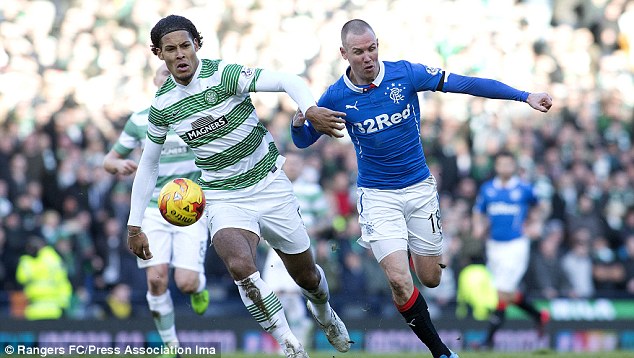 Ever since the abysmal display at Hampden a year ago against Ronny Deila’s Celtic by then-Rangers manager Kenny McDowall’s Ibrox outfit, the pressure regarding the Old Firm match has been doused a tad.

Rangers and Celtic are both in today’s draw for the fifth round of the Scottish Cup, and while chances are slim that they could meet, given there are 16 teams left, nevertheless there is always a chance.

And the apposite question is do Rangers stand a realistic chance?

If this question had been posed a month ago, many fans, yours truly included, would have probably said no.

Despite the strides made by Mark Warburton, late September/October to December saw a rather noticeable dip in form, with struggles at Dumbarton, losses to Hibs, St Johnstone and Falkirk, and even a draw against Livi.

However, ever since that colossal trumping of Alan Stubbs’ Hibs last month, Rangers look a side reinvigorated. The passing intensity has increased, the pressing has exponentially improved, and there have been goals galore.

In three matches, Rangers have scored 15 goals and just three conceded and are absolutely back to the early season form which saw them look so rampant.

Rangers had their dip, and now the incredible stat of the week is that no one has scored more in Scottish football, or conceded less.

Are Rangers ready for Celtic? Infinitely more than they were the last time the two sides met, that is most definitely for sure.

While there remain tentative questions about central defence, full back, midfield and attack have been electric and would cause problems for any defence in Scotland. Young Barrie McKay has absolutely flourished recently too, coming from nowhere to produce some stellar displays including a stunning goal in yesterday’s demolition of Cowdenbeath.

However, one does have to urge a note of caution. The last time Rangers played an SPL side they were comprehensively undone by superior quality and more clinical finishing. One must warn against arrogance; yes, Rangers are looking in far better fettle than they were only a few weeks ago, but they are miles from the complete product and could still struggle to compete even in a one-off match with Celtic.

This is not to say they cannot beat Deila’s men, but the naïveté shown going into some of these bigger matches expecting Warburton’s magic to roll over the best teams in Scotland is foolish – in a one-off match, yes, of course Rangers can beat Celtic, but the last time we felt such confidence St Johnstone gave us a bit of a football lesson.

If Rangers draw Celtic, or indeed any SPL side, Warburton will know better than anyone that his players will have to be at 110% to get a result – by some distance the best team outwith the SPL, nevertheless Rangers will have to go up a level to overcome any side in that tier.

As for Celtic, as poor as they undeniably have become, they are still a better team than Rangers; many point to the Hearts example of how good Rangers could be in the SPL. Well not only are they nine points off the lead in third, but Celtic have a game in hand. There remains a significant gulf between Celtic and the rest of the SPL.

Whether Aberdeen can keep up their current challenge remains to be seen, but tellingly, regarding Hearts, they have not beaten Celtic in any competition since being relegated. In fact, they have not actually beaten Celtic since early 2012 and that includes clashes between them since the rejuvenated Gorgie men were promoted.

What is my point? Rangers fans should not assume they can beat Celtic. Warburton’s team is infinitely better than the McCoist era Rangers was, and is better equipped for such a tie, but the St Johnstone result teaches us that caution is crucial.

And no one will know that better than the Rangers manager.