Home Rangers End of the Ibrox road for Cammy Bell? 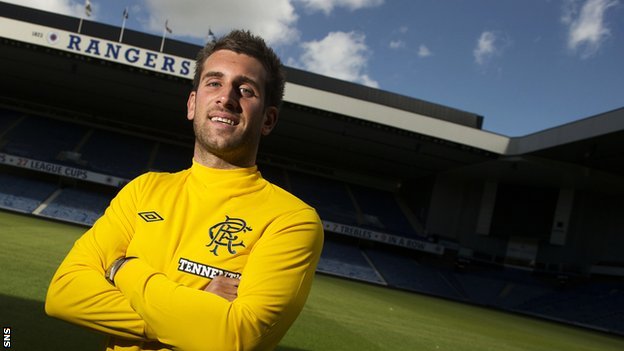 With Rangers confirmed as taking giant Polish goalkeeper Maciej Gostomski on trial from Lech Poznan, it near-confirms the end of his Rangers career for one Cammy Bell.

The one-time Scotland cap never convinced at Ibrox, and despite his impressive displays for ex-club Kilmarnock which catapulted him into the Scotland reckoning, he has been completely unable to replicate that form in Govan, before a reported shoulder injury during pre-season curtailed his time in Glasgow’s south side entirely.

His underwhelming displays were maybe somewhat exaggerated by his disastrous flap in the playoffs at Fir Park when he was beaten by a speculative lob and managed to fall into the net along with the ball, but that incident highlighted how he failed to stamp himself on the Club.

Furthermore with injury ruling him out till next year at the earliest, one suspects this trial is to appoint a senior deputy to first-choice Wes Foderingham to replace youth stopper Liam Kelly who has warmed the bench this season.

It must be pointed out Bell has not made a single match-day squad since Warburton took charge, having also undergone surgery to try to get to the root of the injury problems plaguing him, but with his manager having insisted the ex-Rugby Park star would return imminently, it appears Warburton was simply protecting the player from scrutiny.

Unfortunately for Rangers Bell is on a four-year deal with one and a half years remaining (it expires summer of 2017) and any departure would have to be ‘mutual consent’.