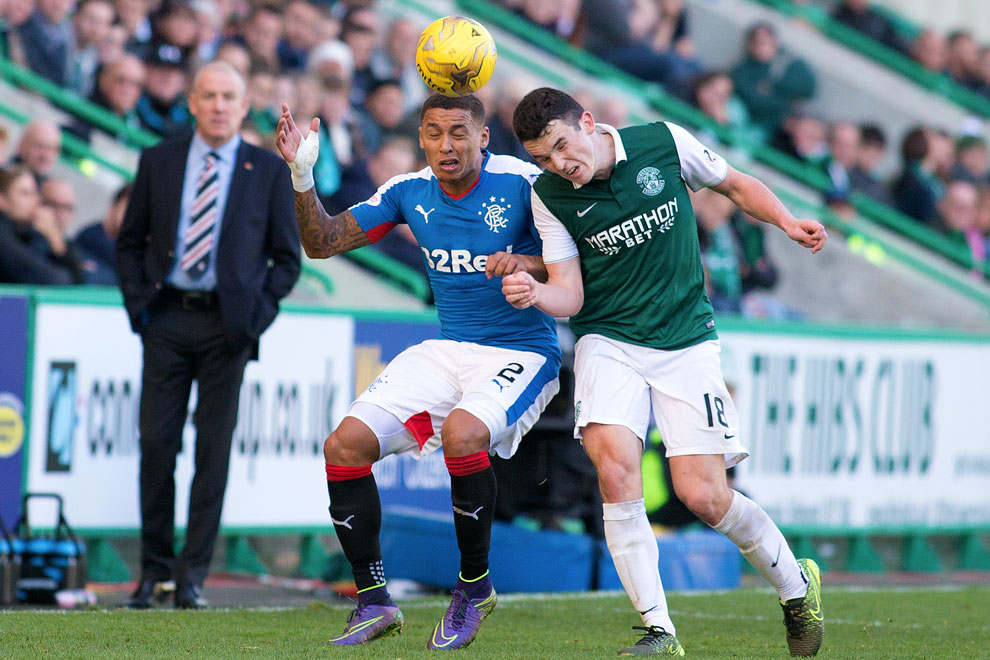 Going into yesterday’s match at Easter Road, while the record books said 11 wins from 11 and there was plenty of evidence in the preceding weeks of unity and togetherness within the players, there is no denying form had struggled a little bit.

Opposition, starting to close ranks and shut up shop, dedicated themselves to stopping Rangers – borderline illegally, but undeniably astutely.

The early season scorelines of 6, 5, 4 and even 3 had become a serious rarity, and while the flowing football was not completely gone, it had struggled to be as influential, effective, and creative as it previously had been.

Possession stats had been consistently good, but a spark just seemed to have been removed, and 1-0 and 2-1 scorelines, previously non-existent, punctuated recent victories.

This in itself is no crime. No team (an on-form Barcelona aside) is going to bestride like a colossus and win by cricket scores every match. And winning is everything.

The problem is such lavish victories epitomised Warburton’s style and his Rangers, and with them becoming the exception, teams, sadly, are not fearing Rangers quite in the way they did. Instead of expecting to lose they park the bus and try to nick something. And believe that they can.

Naturally, they had failed – but the mentality of opponents has undeniably changed and it has forced Rangers to struggle more.

When Rangers went to face Hibs yesterday, it was the home side arguably in the better form. They had momentum, and in truth the Magic Hat knew it and went with a bold selection of three (a recalled Wilson, Ball and Kiernan) at the back (despite a little porkie pre-match that it was a four), Halliday in front of them, Tavernier and Wallace flanking wingbacks and a dynamic front four of Holt who sat behind Clark, as McKay and Waghorn flanked. A sort of 3-4-3 which adjusted to 3-1-2-1-2-1. Almost.

It was certainly a hard formation to decipher, and in truth, while Rangers had a fair bit of the ball, as always, they went nowhere with it and only a loose ball which fell to Tavernier troubled Oxley all first half.

The second half saw a fortuitous deflection off ex-Ranger Darren McGregor give Rangers a deserved equaliser (on the count of possession and dominance anyway) and Warbs’ men, buoyed by this, upped their game and started to look very dangerous indeed.

But on 55 minutes the Magic Hat made an arguable mistake. If he had been at fault with the original team selection, he half fixed it and half compounded it – he removed the hopeless Clark (who should never have started anyway) and replaced with Oduwa (who should have), and removed the incredibly poor Danny Wilson but shifted on Zelalem.

One might think this was spot on – sadly, though, Zelalem was awful again. He has come back from the international break a shadow of the player he left as, and gave the ball away repeatedly while slowing the game down too much; one can only hope he regains that previous form soon.

In more positive midfield news, Holt was absolutely stellar – he stepped up big time and produced a mammoth display – his quiet effectiveness was even more obvious yesterday and it is arguable he is one of Rangers’ best players. And Halliday was also a little more robust – the former Bradford man had been slightly quiet recently but worked even harder and ran his heart out to stop as much as he could in the middle.

Waghorn up front was Rangers’ best attacker – a brute of a man, he was forcing the play, and had no lack of skill. But McKay and Clark were weak links in this one, and produced very little.

But the point re: Warburton’s error – with Rangers gaining momentum and starting to pepper Hibs’ goal with shot after shot and chance after chance, why change the formation? The introduction of Zelalem weakened Rangers considerably and derailed a lot of the good post-half time work that was building.

If the formation started out wrong, it became ‘right’ as players grew into it and just as it was getting somewhere it was changed.

In the end, a goalkeeping error from a corner saw Hibs steal the three points, while an invisible wall at their end stopped them conceding.

Rangers’ luck just was not in on this one.

So, what did this result and performance mean for Rangers? This time last year the notion of being 5 points clear with 11 wins from 12 would have been dreamland – so let us not be spoiled into crying over one loss.

Warburton has been astonishing since he has been at Ibrox, and the feelgood factor is surely back. But the warning is there now. Warbs has kept promising every week that Rangers would get better – but there is evidence this is not happening. And now teams around the Ibrox men know Rangers have vulnerabilities, especially in defence.

Complacency is Rangers’ biggest enemy, and in a perverse way, losing this one was the the wake up call Rangers needed. Too much profligacy, too much ‘tiki-tika’ and trying to walk the ball into the net and not enough killer instinct in recent weeks.

Warbs’ will know this, and will work hard on getting more out of the squad which may just have been believing the hype (as we all did) too much.

There are three quarters of the season to go – Rangers need to bounce back on Saturday against Alloa and show their mettle.

We still believe in the team, the vision, the manager, the direction – one loss changes nothing.

But it is food for thought and that knowledge must be used wisely.