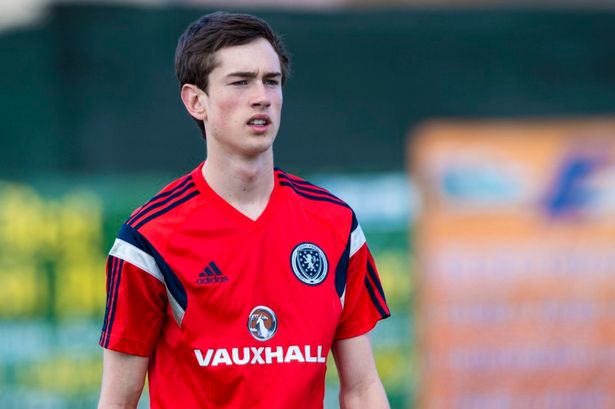 Ryan Hardie and Ross McRorie both netted in Scotland U19’s demotion of Ireland in Limerick, with the away side coasting to an easy 4-0 win, while at U21 level Ricky Sbragia’s kids got themselves a 2-2 draw in Paisley aided by Rangers’ Barrie McKay in his first start at that level, having been present at previous ranks.

The question is why the likes of McKay and more significantly Lee Wallace have failed to even get a call up for the senior side – even if Rangers fans would not expect Wallace to start ahead of Andrew Robertson, who has been quite a find for Gordon Strachan’s regime, they would envisage him being the deputy, certainly in place of the disastrous Steven Whittaker.

Whittaker has earned a derogatory nickname from his club (Norwich) supporters which sees one letter altered to more accurately describe his ability, and I will allow you to decipher which one that is for yourselves.

The point is Rangers’ resources are being well-utilised at the youth levels within Scotland’s national sides, with even reserve goalkeeper Liam Kelly being a significant asset, but for the senior side, it appears they remain out in the cold for the foreseeable future.

In truth, Strachan does not rate the SPL, and essentially uses the best of Celtic along with the EPL and English Championship, so at least he is consistent, but it is pleasing to know that Rangers’ players are not being completely ignored and youth levels see them doing really rather well for their country.

As we know, the likes of Nathan Oduwa, Fraser Aird and Gedion Zelalem regularly feature at youth level for their nations so it is definitely a growing time at Ibrox with the younger players breaking into national setups.

Does this prove Hardie and McRorie have what it takes to break into Rangers’ first team on a more sustained basis?

On this Warburton said on the official site:

“It’s great to say they get the experience of what is matchday. How do the experienced players like of Kenny (Miller), Lee (Wallace) and Dean (Shiels), how do they prepare? The timings of their meal, the timing of even getting changed and not being in the strip for too long, it’s just learning from the pros who have been there and done that but it’s most important for them all to see a pathway. They work hard at their level, at 17s and 20s, work hard every day in the Academy, they’ve got to see a pathway to the first team. If every day you are banging away and there is a ceiling, then everyone fails. So the likes of Liam Burt, Ross Lyon and Dylan Dykes, they’ve earned it, we listen to the feedback of Craig Mulholland and his staff. We talk every day about their progress so these guys have worked hard, deserve their chance and I’m sure more will come.”

And specifically on Hardie:

“I’m delighted for Ryan, he’s worked hard and he’s scored goals, he’s improving, shown a great attitude, great work rate. He’s well-liked by the squad here so he’s ticking a lot of boxes but he knows he’s at the start of a long road. So to really maximise that potential that he has, he’s got a great opportunity here. He’s earned that opportunity so now go and take it Ryan. If he carries on his progress I’m sure he’ll be fine.”

Warburton has shown a willingness to give younger players a chance – by bringing them on with 30 minutes (or more) left on the clock they get heavily involved, and if good enough they can earn a start.

Time will tell who makes it and who does not.