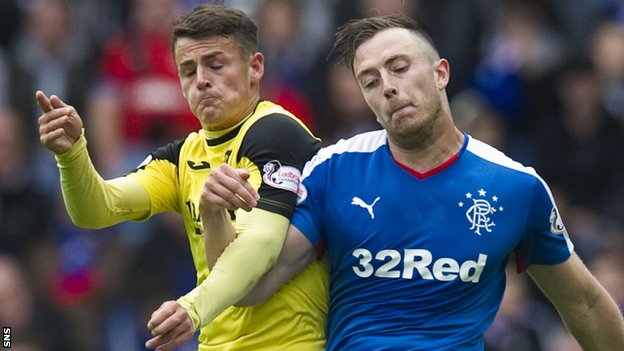 If this season has brought any surprises, beyond Rangers’ stellar start (not such a surprise after Mark Warburton was appointed manager), it is the ‘fall from grace’ of effectively this summer’s marquee signing.

Former Hearts, Blackpool, Liverpool and Rangers defender Danny Wilson was truly the biggest name Rangers brought in over the summer, and was even posited as potential captain material.

With the 23 (yes, he is still only 23) year old having quit SPL-bound Hearts, Rangers’ acquisition of him was considered a real coup, given the lad has an astonishing level of experience, including the Champions League and English Premiership.

It was also impressive in light of the fact Celtic had concrete interest in him too, but ‘pulled out’ when he chose Rangers.

But, if we are being fully honest, while not exactly disgracing himself, Wilson has not had the impact on defence that was hoped – he has made quite a few blunders, with St Mirren’s goal at Ibrox an example of his poor reading of the game, along with an incredibly careless challenge in the box at Dumbarton, which led to a penalty goal.

At the same time he has also had good moments, with some solid blocking at the back, especially in some matches where Rangers suffered spells of being pressed.

Ball has done, overall, fairly well – just one major mistake v Alloa, which did not lead to repercussions, and it is hard to see how Wilson can regain his place if the 20 year old stopper holds his form.

It simply remains bizarre that nigh-on every signing Rangers made this summer was relatively unknown north of the border, with only Wilson being the ‘star’ signing.

And now he finds himself out in the cold, with no starting place in sight unless as part of a three or injury benefits him, while the rest all play significant roles.

If Ball can maintain his form, Wilson will struggle to play any more than a cameo role at Ibrox for the foreseeable future.