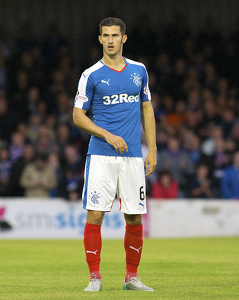 If there has been a question mark over Mark Warburton’s Rangers, it has been the defence.

In truth it has not been truly tested extensively, but the one major time it was put to the sword, it sadly failed against St Johnstone.

Naturally, this is not to blame the back four for Rangers’ exit from the League Cup, but to highlight that Rangers remain a work in progress, and even Saturday’s hard-fought win over Queens saw the away side nab a counter-attack goal which, again, exposed a central defence which has overall failed to truly convince fans.

However, one distinct bright spark was that, despite said goal, Tottenham Hotspur’s on-loan centre-back Dominic Ball truly did stand out, deputising as he did for Danny Wilson who picked up an untimely tweak in training.

A routine criticism levelled at the back pairing has been their propensity to lump the ball aimlessly forward, with quite a few punts from the depths ending up leading nowhere.

However, Ball garnered a great deal of praise for his predilection for composure, and using the ball at the back in a more concentrated, constructive format. Showing a careful ability to dribble (not reckless marauding like Mohsni used to do) from the back, which essentially allowed him to assess his options while retaining the ball attracted a great deal of respect, with a high number of fans believing this partnership (Ball and Kiernan) might actually be the way forward.

This is not to say Wilson has been poor – he has not, and it would be unfair to suggest he has. But there are significant similarities between he and Kiernan, and perhaps those shared traits and a lack of diversity is not helping in Rangers’ cause to become more watertight defensively.

Ball is, of course, on loan, but his composure, brute-force defending and decision making belied his tender 20 years, and gave his manager the kind of problem he will enjoy having.

One thing is for sure – Dominic Ball has forced himself into the reckoning and might just find himself selected more often now.

It really is a good dilemma to have.