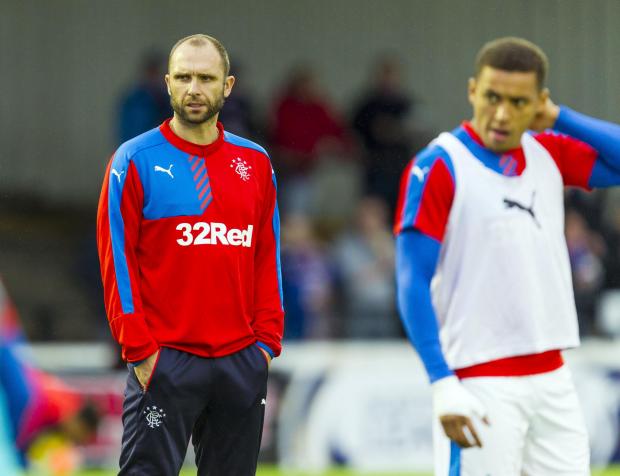 It may be the longest trial in football history, and may have been cluttered with more setbacks than your average Irish football blogger’s admin 2 claims, but it does now seem that former Derby midfielder John Eustace is finally fit after almost four months at Murray Park, having sustained a serious knee injury in January.

That was the last time he played competitively, and now Mark Warburton has revealed he is only days away from signing a deal to become part of the playing squad.

If this transpires, and it appears it will, this site is delighted to have been wrong that he would be unlikely to gain fitness and would only be offered a player/coach contract – pity other sites who get things wrong never hold their hands up to it.

Back on topic, Eustace is one of those rare breeds – a player no one has a bad word to say about, in terms of their ability. And he is absolutely the missing piece of Rangers’ jigsaw.

Andy Halliday has been filling in at the anchor role all season, and he has done a decent utility job, but his understandable lack of experience in that position has caused naivety and left the defence exposed more than once.

Halliday would be much better utilised further up, and Warburton has known this from day one, hence his persistence with Eustace. With no further opportunities to get a DM till January, unless a free agent is found, Eustace was the only option.

All testimonials have been incredibly positive about Eustace’s class – generally-speaking he has been thoroughly praised, and credited with Derby’s fine run last season, till his injury. Fans of the Rams have assessed that there was no coincidence Derby’s dip in form coincided with Eustace’s absence.

And Rangers ache for a quality defensive midfielder, the type to properly read the game in the middle of the park and intercept opposition attacks.

The one attribute Rangers lack on the pitch is leadership outwith defence; Wilson and Wallace do lead well at the back, but beyond that there are few chiefs. Add Eustace’s experience, wisdom, ability, and, hopefully, ability, and Rangers will finally have one of the critical missing components of the overall puzzle.

With Eustace in the engine room, Rangers should find themselves far less exposed at the back – not only is his positional sense top class, and his vision, but he will coach those around him, relative youngsters like Zelalem, Holt and even Halliday – Rangers’ midfield will at last have all the right pieces.

Here is hoping once he signs the deal he can retain that fitness.