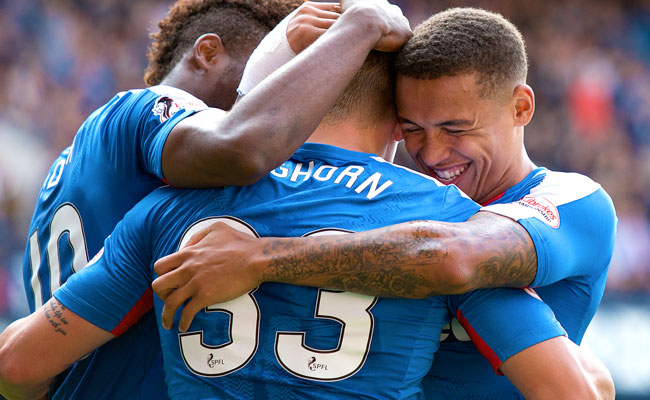 35 goals. Five conceded. Possession through the roof. Yes, as a previous entry indicated, stats are not the be-all and end-all, but the truth is Mark Warburton’s Rangers have been astonishing this season, with a captivating quality of play, flowing football, and minimal goals conceded.

9 in a row – Mark Warburton becomes the first manager in Rangers’ history to win his first nine matches in charge. Yes, it is against Alloa and St Mirren and not Aberdeen and St Johnstone (well, it will be on the 22nd) but then Rangers have Barrie McKay and not Brian Laudrup (no disrespect Barrie, you have been impeccable this season).

The point is while the level is arguably lower, the same excuse was not being mentioned when McCoist was struggling and producing diabolical displays with SPL-quality players – players who should have been far better were utterly shambolic under previous regimes, and now ‘inferior’ players are doing far, far better under a manager who knows what he is doing.

So the question has to be asked: when will Scottish football admit what they know now deep down – that Rangers are not only back, but look hungry, superb, and fully equipped to deal with, hopefully, next season in the SPL (with, obviously, a few reinforcements)?

Scottish football knows that you do not score 35 goals in any professional division in any country if you are not a bit good – Rangers are positively rampaging in a style rarely seen in this country. Hearts last season were excellent, but quite simply nowhere near as good as this.

Rangers fans are excited by every match, and now go in not only expecting to win, but to be dazzled, entertained, and to see goals. Lots of them.

Naturally the form will hit a lull, it has to, but that is only normal. Even Hearts did not win every match last season – but their start just did not hit the heights Rangers’ this season has. They scored 23 in their first 9 matches but did draw in Dumbarton 0-0 during that spell and of course were drubbed in Livingston. Still impressive, but just not as good as Rangers’ 35 goals and all wins.

At what point does Scottish football actually concede that the team they thought would be in the bowels of the land’s lower divisions forever under the likes of Ally and Kenny is growing into a true football machine and is a force to be reckoned with now?

Well, maybe we would rather they never do. If they assume this is not real, if they assume Rangers are not that great really then their guard goes down and Rangers punish them big time.

Or maybe, just maybe, they are smelling the coffee at long last.