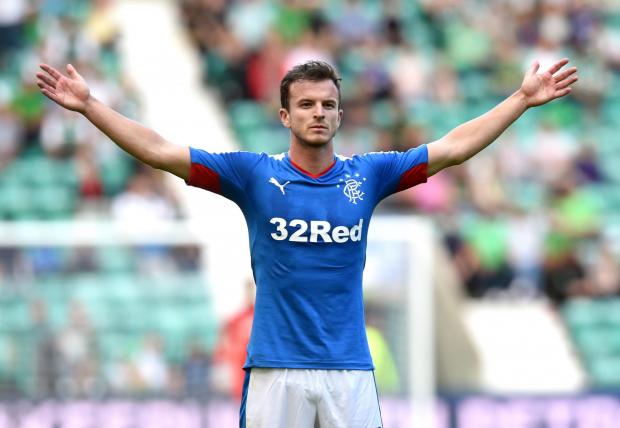 When Andy Halliday was first linked to Rangers, most fans wondered which attacking position manager Mark Warburton had him earmarked for.

After all, Halliday was historically an attack-minded midfielder, with the ability to deputise more than ably on the wing, so the immediate conundrum was figuring out which winger appeared vulnerable to the chop.

However, 10 matches into the season and Halliday has been reborn entirely as a defensive midfielder, and while some fans argue it is not his best position, he clearly has excelled in it.

Time and time again we have seen the former Bradford winger covering space, making vital blocks and tackling at pace in the engine room, while managing to score the odd worldly in the process.

In truth, he has been a revelation in that position at Ibrox, one he was barely familiar with before joining, but as a boyhood fan of the Club was clearly willing to play in any position required. He admits himself the position is pretty new to him, and he has drawn on the experience of another to help him adjust to it:

“For me personally, I’d be delighted if John (Eustace) signs because this (defensive midfield) has been quite a new role for me and he has been mentoring me a wee bit.”

Eustace, of course, remains on trial at Murray Park, with Warburton having a timescale in mind to make a decision on what role to offer him (if any), but the curiosity is Halliday is currently the only fit defensive midfielder Rangers actually have; the signature of Eustace would either see them both vie for the slot, or would see Eustace take it and Halliday either benched or shifted to a more advanced attacking position.

But then, with Eustace and Halliday both starting, there would only be one slot left for Holt, Zelalem and Law to battle for.

But this is all conjecture – it has been quite a paradigm shift for Halliday to go to DM, and his performances there go to show that a true professional will excel in alternative positions especially when he has an in-built love of the Club.