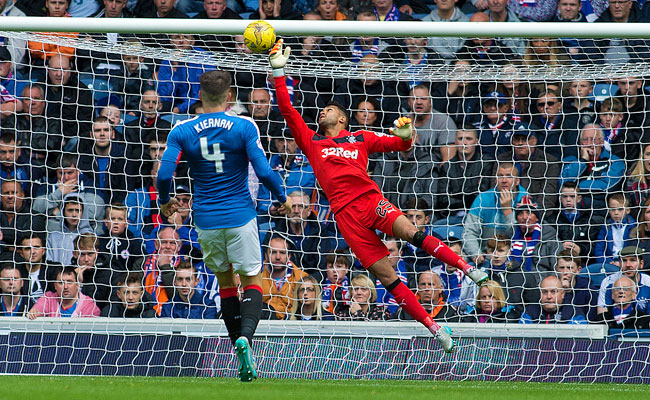 The Rangers boss was full of praise for the entire team after a fine response to last Tuesday’s cup exit, but particularly wished to wax lyrical in the direction of 14-goal man Waghorn who has become increasingly important for both goals and general contribution, and his man between the sticks in Foderingham, who has improved immensely following a slightly unconvincing start.

“All credit to the team for their response, delighted to see them get their rewards. Well done to Waggy and special mention for our GK.”

Waghorn of course nabbed the first hat trick of his senior career in Greenock, and the first for any Rangers player under Warburton, and is currently receiving a great number of (deserved) plaudits, but it was Wes Foderingham’s impressive double save from Tidser then Johnstone just before half time which nailed the shut-out and kept confidence levels high.

With some especially impressive saves against Raith, Alloa and Livingston, Foderingham may not be quite in the echelons the likes of Goram, Klos and Woods occupy, but he is certainly shaking off the mildly nervous start he had and has grown into a fine and competent keeper.