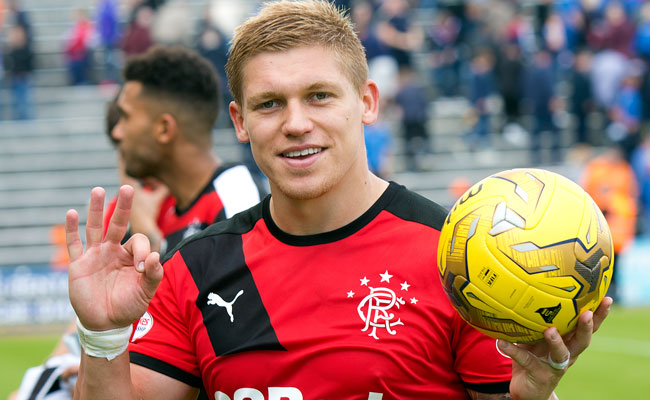 With a well-publicised ‘over-reaction’, as labelled accurately by manager Mark Warburton, following the disappointing League Cup exit to Premiership outfit St Johnstone, there appeared an unwritten demand that his side travel to Cappielow and absolutely destroy Morton in order to ‘prove’ that the glossy displays which dominated the first nine matches (slightly less in the following two) were not a thing of the past.

Indeed, even this site must hold its hands up to a slightly unfair response to the match in some respects – but stands by the notion that as poor as the result was, it was a learning experience, and a very good one in that context.

Consequently the side was off to face a side Rangers had not encountered competitively in some 15 years, and delightfully Barrie McKay had been restored to the lineup in the only change, the young winger taking veteran Kenny Miller’s place up front.

And the truth is Rangers absolutely strolled the match – that change along with a fully fit Jason Holt and rather rampant Nathan Oduwa (not to mention a breeze of a display from playmaker Gedion Zelalem) helped Rangers flow with gusto, with attack after attack (21 shots, 11 on target) and a complete domination of the ball (67%).

Yes, defence was exposed on occasion, with quite a few useful lobbed balls finding the Morton wing, but none of these attacks came to anything and defenders Rob Kiernan and Danny Wilson looked much more confident than they did on Tuesday.

A major reason for this was the comfort of the midfield, aided so well by a fully-fit Jason Holt whose unsung work takes an extraordinary amount of pressure off the back due to his efficient use of the ball and regular linkups. He was not fully fit on Tuesday and that definitely hurt the team.

But one criticism has to be Andy Halliday – now, before I continue, I am not slaughtering him or unfairly singling him out. Halliday has been a great signing and a truly tireless worker – but he is not a defensive midfielder and it is starting to show, more and more. A major reason the defence gets caught out, on top of the high line, is Halliday’s lack of intuitive positional sense in that slot – in short, he struggles to protect those he is sitting in front of. He has pace, and can cut out sharp attacks, but for the bread and butter breaking up of play, he struggles to anticipate and block out midfield attacks.

But then, he is not a DM and he is doing the best he can in an unnatural position.

Otherwise Morton really had little foothold in this game, and the few gilt-edge chances they managed were well-saved by the increasingly impressive Wes Foderingham.

Rangers travelled to a solid midtable Championship side and won at a stroll – they should have scored many more, and it was a fine response to a bad night at Tuesday’s office. Yes, it got a little scrappy in the second half, and the dip in the display during that period was not really improved by either substitutions of Shiels or Miller, but it mattered not.

Waghorn got his first hat-trick for Rangers, including two open-play goals, and Rangers ran out comfortable winners.

Warburton’s men made a statement today that the Championship is theirs to lose – and with their challengers slipping up around them, that is more true than ever.