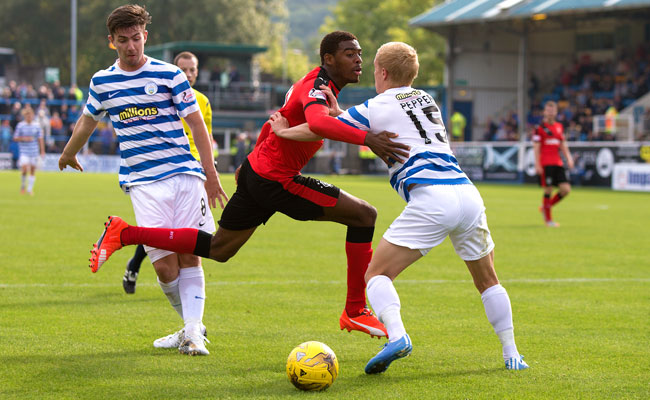 After the zenith of his brilliance against Raith Rovers, on-loan Spurs winger Nathan Oduwa had suffered an understandable micro-lull. Versus Livingston and Dumbarton his influence was noticeably reduced; after all, wingers are arguably the most inconsistent players in any team and it is incredibly hard to keep up a level of brilliance which makes fans downright gasp.

Against St Johnstone he certainly did not hide, and should have scored but for an inconsiderately placed crossbar, but like the rest of the team there was a sense that the lull was the calm before the storm, and that storm was yesterday afternoon at Cappielow.

Oduwa is clearly back – this lad produced another outstanding display, summed up with an arrogant, and brilliant nutmeg late on. It maybe was not quite the dominant masterclass he showed against Grant Murray’s men, but it was enough to show the limitless talent he has and the excellent attitude in conjunction with it.

When Oduwa has off days, he does not hide (unlike the chicken he was signed to replace) and just keeps at it – trying things, fighting hard, and frequently the good stuff comes off. Just ask Greenock’s Lee Kilday, the victim of yesterday’s nutmeg, or Colin Hamilton, Alloa’s famously ‘disrespected’ centre-back.

The fact is football needs talent like Nathan Oduwa, talent that is not afraid to try things, that is not afraid to have a go – while his display v St Johnstone was less productive than he is capable of, he kept giving it his all, and with every match his team play, which was never a weakness in the first place, keeps improving.

Rangers will struggle to hold onto this kid who evidently has the ability to go all the way in the sport – hopefully Mark Warburton can persuade Mauricio Pochettino that another year on loan would be of benefit. Or even that he can part with the English attacker permanently, if Oduwa is game.

Like his colleague, the equally wonderful Gedion Zelalem, Oduwa’s target is well-known as being the Spurs’ first team, but Warburton is a persuasive chap and highly-respected in England – he might just be able to work that magic hat of his in Oduwa’s case.

Nevertheless, either way Oduwa has our blessing to keep on disrespecting everyone.