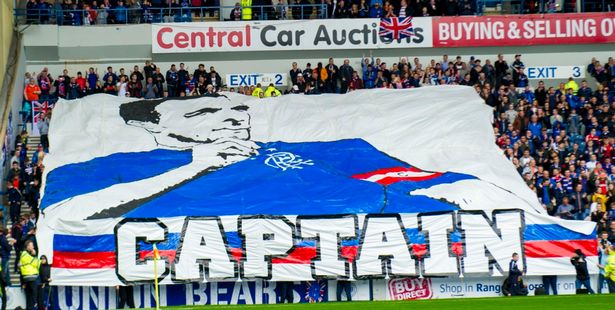 “If that’s how it’s ended up, I’ve sacrificed (Scotland) to stay with Rangers and be part of the club’s recovery, that’s a fair sacrifice to me.”

With more internationals coming up, the latest Strachan Scotland squad once again overlooks Rangers’ captain who has not been called up since he featured as a sub v Macedonia in 2013.

Hull’s Andrew Robertson, an admittedly fine player at left back, certainly has that slot covered with aplomb, but that it is Norwich City’s dire ‘full back’ Steven Whittaker who deputises for him and not Rangers’ marauding stalwart remains a bewildering state of affairs.

Even more bewildering is Wallace’s omission before Robertson emerged, with the likes of Whittaker or Mulgrew playing out of position instead of Govan’s finest occupying his primary slot.

The reason always cited was the level he was playing at – but if that was the absolute reason then quite simply no sub-SPL players would ever get a call up, even for squad depth – but Ian Black and Lee Wallace both sparingly managed it.

Furthermore, the fact that the youth sectors of the national side sees plenty of use of Rangers’ resources forces the conclusion that it is not even Rangers’ level which sees them isolated from the national regime.

But, as he says, Waldo has always been happy to sacrifice the national team for his Club, always happy to stay at Rangers no matter what it might mean losing out on in other ways.

“I’ll never give up hope (on being selected). I’ve been faced with obstacles in the past. I’ve always stayed focused on what I’m doing here and do as well as I can for Rangers. It’s a bonus what happens after that.”

It is no wonder he was installed captain, and no one deserved it more.