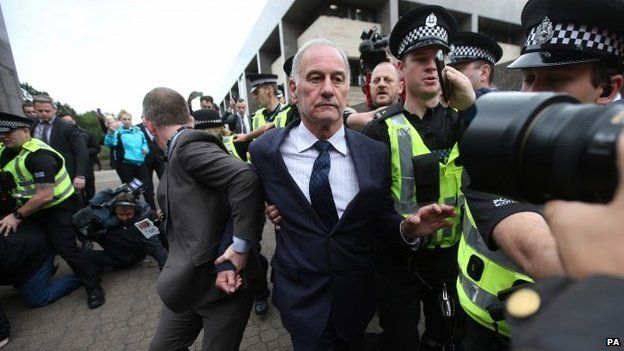 It cannot be denied that the past 36+ months at Ibrox have been nothing short of hell.

From being cast to the flames of the Third Division, to fan protests at board activity, to absolutely vile football, to salaries in gross excess of what was warranted both on and off the pitch, Rangers fans have seen their Club teetering on the brink of complete oblivion on several occasions but managing to just about cling onto the edge with its fingernails.

Over the past 48 hours, four men have been formally arrested/detained/charged in connection with an alleged fraudulent takeover of Rangers:

Then Charles Green, with a supposed consortium of investors called Sevco in 2012.

Then the two administrators who handed the assets over to Green:

The charges are “conspiracy and involvement in serious organised crime”. About as grim as it gets in corporate espionage.

Ibroxnoise.co.uk was on record as a major supporter of Charles Green and his intentions. Like many others, we were wrong. Plain and simply duped. Some saw through Green and suspected his credentials from the off – but many did not, and those, like us, appear to be holding their hands up to being wrong. Being wrong happens in life – when information you receive and the judgement of those you trust turns out to be misguided.

Some other individuals who backed Green still do, or are dramatically altering their tune – that is their choice, but it is not ours.

Over three years later Green and his chums find themselves in court – charged with fraud, with BDO’s due diligence bringing the alleged fraud properly to light, something the SFA were supposed to do, but frankly did not bother.

It appears, after a long, long, hellish road, Rangers supporters are finally about to get the justice they deserve, for the pain they have suffered.

Furthermore, it is not only Scottish football, and the four miscreants who put Rangers and our fans through this, but HMRC – they illegally pursued a tax case that was not even valid. That tax case brought a massive cloud over the liquidity and equity of the holding company, and it was based on complete falsehoods. As proven by a court of law.

If BDO could kindly pursue the Inland Revenue with the same fervour as they have with the four accused, that would considerably aid the removal of Rangers’ reputation from the gutter over this.

Rangers and our fans are victims of one of the biggest corporate frauds in Scottish history – perhaps the biggest. HMRC, Scottish football, Duff & Phelps, Craig Whyte, Imran Ahmad, Charles Green and even Ticketus all deserve their end of accountability in this sorry tale, as does Sir David Murray for ‘being duped’ by Whyte. As layman non-economic non-business people, most supporters had to go on trust, but Murray is supposed to be an expert in weeding out the frauds.

If Giovanni Di Stefano was right all along, why on earth would Murray fail to spot it.

Regardless, finally, we are truly seeing Justice for the Rangers support.