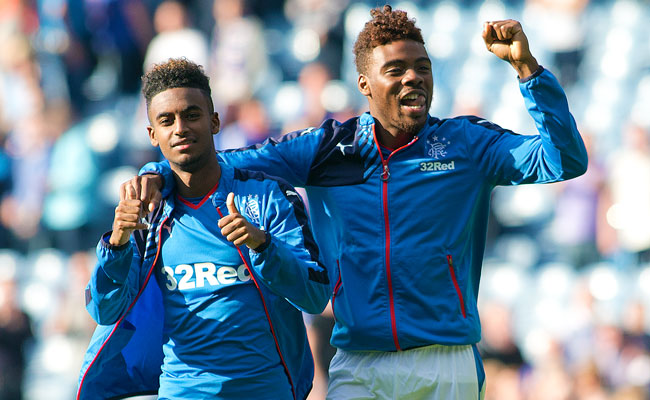 Yesterday’s stonking 5-0 dismantling of Raith Rovers was arguably the finest display at Ibrox from Rangers since the Advocaat days, maybe more. While the home team was perhaps guilty of mild over indulgence in the belly of the first half, with attempts at borderline walking the ball into the net and overcomplicating the play, the quality of fare nevertheless transcended a new level and was immaculate.

However, on a day where every player produced a stellar show one jersey stood out more than the rest with a performance which not just bewildered the visitors, but absolutely terrorised them

With three assists (if you count the penalty won), Tottenham’s on-loan winger Nathan Oduwa produced a performance which had even Spurs fans raving and wishing he was a first-team regular at White Hart Lane.

From his halfway line burst which led to Rangers’ third goal, to the wonderful flick which led to the second, to the dazzling feet which won the penalty, this was a display of absolute perfection from the young English winger, one which, if he was to maintain that level of momentum, provides the evidence that he has every tool to make it to the very top of the sport.

Nathan Oduwa humiliated Raith Rovers. He did not just outfox and outwit, but he pummelled the guests into submission with trick after flick in an unspoken response to Rovers’ disgraceful conduct over Ryan Hardie, and to those who accused him of ‘disrespect’ against Alloa.

They said the best place for a footballer to do his talking is on the pitch – well Nathan Oduwa picked up the loudest PA system known to man, and yelled into it at the top of his lungs. The only thing missing from his imperious display was a goal, but as much as it would have been the icing on the cake, the cake itself was utterly magnificent.

Watching this kid beat opponent after opponent in a row, and taking every foul like a man without any complaint was simply breathtaking to behold.

Ok, Raith Rovers are not Real Madrid but they are an extremely competent Championship side who have only lost to three of the sides above them – Rangers, Hibernian and Falkirk. They are a solid midtable side, but Oduwa completely owned them single-handedly.

This is a player with a barrowload of potential, and manager Mark Warburton did a truly stunning job getting him north to Ibrox. He is the kind of player who would stroll the SPL, the quality Rangers could even look to as a SPL-winning level of player.

Rangers are not there yet, but yet another destruction of yet another team in Scotland shows they are on the right track.

And players like Nathan Oduwa will help get them there.

The question is can Warburton persuade him his long-term future is at Ibrox and not in London? Oduwa concedes Pochettino’s first team is his ultimate target and one cannot blame his ambition – the EPL is where every player wants to be in Britain.

But if Warbs can convince this stellar winger to take a gamble and be part of the Warburton machine long-term, Rangers have another absolutely wonderful talent on their hands.