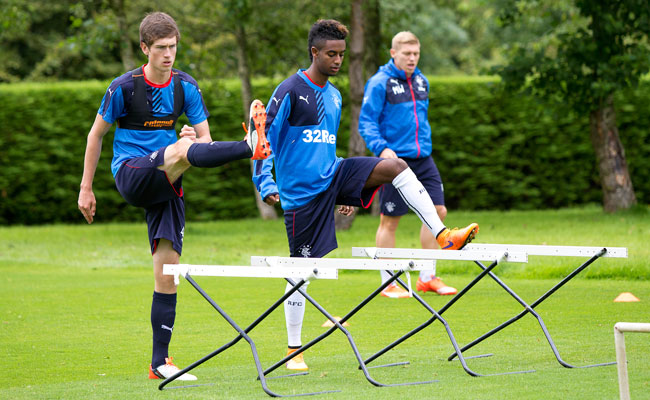 “But how will he do at Airdrie on a wet Wednesday night?”

The old cliché of any stylish foreign player coming to Britain/Scotland and struggling to cope with our agricultural weather in a nutshell, but in Gedion Zelalem Rangers fans can be truly excited if the on-loan Arsenal youngster is thrust into the first team for the visit to the Excelsior tonight, no matter the weather.

It is a thunderously unclement Wednesday, and not really the weather for the kind of snazzy football Zelalem is capable of. We have all seen the videos though, the skill, the flicks, vision, dribbling and turning, and if the US youth player starts tonight and still manages to produce even a glimpse of the quality he is most definitely known for Rangers will know they ‘have a player’.

The display against Hibernian at Ibrox was hard-fought but as Warburton stressed, it was strewn with mistakes and careless distribution, particularly in the opposite half. Zelalem is being groomed for the ‘trequartista’ slot, it seems, which is the link between midfield and attack.

Technically that position is not utilised under Warbs’ system, a front three and middle three as is used, but with the dynamic nature of players’ mobility (we saw Jason Holt dribbling beautifully along Hibs’ goal line on Sunday) and swapping of positions on a whim, Zelalem could truly find himself entirely at home with the system, and with whatever position he is placed in.

And I raise that issue in relation to the careless use of the ball because Zelalem seems to be incredibly efficient, clever, and tight with his passing and movement, which would help reduce wasteful play considerably in that area of the park.

Fans are excited by this signing – as pleasant though the glut of incoming players has been, and as much as they have performed, the only name which really excited fans was Danny Wilson. But the more supporters have learned about the Arsenal kid, the more thrilled they have been by the promise he has.

One Gunner suggested this lad has the ability to be a future Ronaldo or Messi. He was almost certainly exaggerating, but if some Barca fan had said the same about Messi as a future Ronaldinho or better back in 2004 when the Catalan maestro was 17, he would have been laughed out the room.

We will see in time what potential Zelalem fills, but in the meantime, let us see how he does ‘at a wet and windy Airdrie on a cold Wednesday night’.