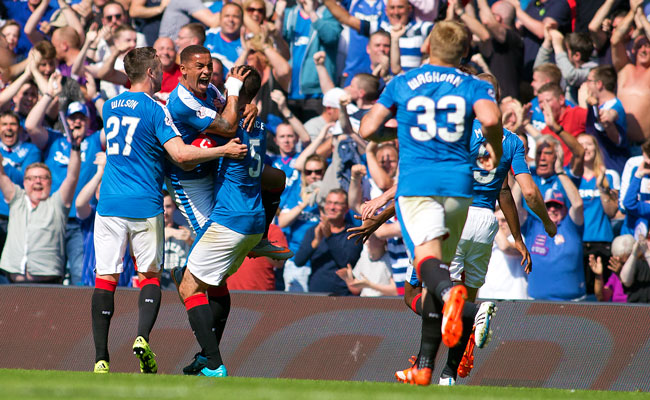 It goes without saying Rangers fans (and fair observers in the Scottish game) have been waxing lyrical about the performances of Mark Warburton’s men, with a colossal five wins out of five leading into yesterday’s visit of Hibernian to Ibrox.

To call the football ‘flowing’ would do it a disservice, and it is no exaggeration to describe the fare on offer some of the best seen under the Main Stand for many years, maybe decades.

However, the one thing that has been missing has been a real test in terms of opposition. Sure, the conditions were as much of an opponent at Somerset Park as Ayr United were, but 2-0 in Ayrshire was a fair reflection of the superiority Rangers enjoyed. Possibly even a slightly conservative one.

But until Hibs came to town, Rangers had not really been under the cosh. In explicit truth, only 10 minutes of the 90 yesterday did we see the visitors really push the hosts, which saw some resolute defending when required by the centre-backs, but nevertheless the Easter Road outfit did provide the first real barometer of where Rangers are right now.

It was Rangers’ first real grit test, the ability to ride a little luck, play slightly worse than normal and still manage the result; and that test was passed.

The reality of this display was that defensively, as solid as some of the blocks from the especially impressive Wilson and Kiernan were, their distribution was something approaching shocking. Kiernan’s insistence on giving the ball away really is quite an Achilles’ heel, and the sooner his gaffer tweaks it out of him, the better.

Both he and Wilson have a curious tendency to ‘do a Jig’ and lump the ball forward, usually hoping for a run from Waghorn or McKay, but rarely does the lob find its target. And Tavernier, revelation though he has been, also finds himself frequently chipping forward for Waghorn to chase onto. It usually fails.

The midfield also found itself working harder than normal, and Law started particularly slowly (he had a far better second half), with the outstanding Holt having to take on the majority of the midfield graft, while Halliday appeared a little subdued overall by his usual standards.

And Miller struggled hugely to have any effect, while McKay became more and more influential as the game grew.

However, despite these weaknesses, despite the several ‘errors’ Warburton alluded to which basically saw weak concessions of the ball and a lack of incision in the opposing half; despite this, Rangers were still deserving winners at Ibrox.

While Govan’s finest definitely rode their luck and have Wilson, Kiernan, Wallace and Foderingham to thank for the clean sheet, the side kept working hard and earned the victory, achieved as it was through a ridiculous free kick from the English Pirlo that is James Tavernier.

It was not sharp and zippy by Rangers’ usual expectations, it even bordered on sluggish. But the victory with 59% possession and 14 shots still told an accurate story of the match overall.

This was probably Rangers’ worst display under Warburton.

Which really is the highest praise you can give him and his XI.