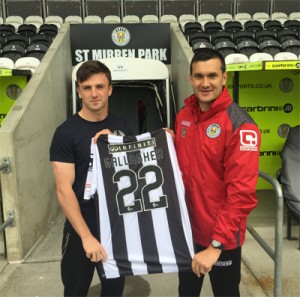 When news broke yesterday that
Calum Gallagher had made a sharp switch to St Mirren Park, it came as a major
shock.
With Gallagher last week
professing his eagerness to be a long-term player for Rangers, and insistence
that he saw himself as vying for a first-team slot at Ibrox, it was assumed
that manager Mark Warburton felt the same given the new boss’s well-documented
focus on the youth players.
However, tellingly when the boss
praised the youth systems and their graduates during his first press conference
after being appointed, he specifically set about naming Barrie McKay and a few
others, but noticeably omitted Gallagher.
Gallagher also had not featured
in any capacity during the first three significant matches of Warburton’s
tenure – the friendly v Burnley, the Petrofac
clash with Hibs and the League Cup win over Peterhead – none even saw the
former Cowdenbeath loanee on the bench. His only brief cameo was a 30-minute
appearance v Ayr from the subs’ bench, and it
seems evident now he failed to impress during it.
Confusingly, this deal to St
Mirren has been called a “transfer agreement”. It is unknown at this time if a
development fee exchanged hands, or what aforementioned agreement actually
entails. Even more bizarre is that it is for only one year.
Mark Warburton said:
“If
they are good enough, they are old enough but they do have to be good enough”.
Roughly translated he is not just
going to use Academy-reared players for the sake of sentimental slush, but for
the sake of truly improving the team.
Sometimes fans get fixated on
using players developed within the Club, but it is worth remembering they are
not all good enough to make the grade; and four managers (of varying abilities)
came to a consensus that Calum is not good enough, even if some/many fans
disagree.
But Warburton believes Gallagher
does not have what it takes, if that is indeed the conclusion he has drawn,
fans have to buy into his vision and trust that judgement.
Rangers are going places, and
unless the manager ever gives fans reasons to doubt his abilities, faith is
required.