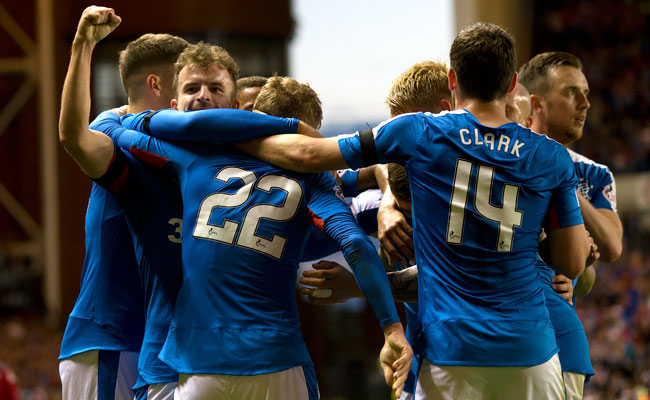 Three competitive matches – three
(poor) goals conceded.
Twelve scored. That is a full
dozen. Rangers, against fellow title rivals St Mirren and Hibernian have
already managed nine goals, with that other three against Peterhead.
To say this Rangers team is
starting to look like the real deal is the understatement of the year. 49,216
fans (including a few hundred Buddies) packed out a completely full Ibrox
stadium to witness the Mark Warburton era deliver on its pre-season promise and
provide a scintillating 90 minutes where it put its money where its mouth has
been.
Pre-season is always an odd
animal, one where fans are rarely able to accurately judge the merits of a team
based on those friendly results. Even here, where two completely valid competitive
matches were played in the normal pre-season period, there was doubt as to how
accurately pummelling Hibernian and dispatching Peterhead actually reflected
the progress Warburton has made.
League business is always such a
different animal. But after 25 minutes of non-stop Rangers pressure including
two excellent goals from captain Lee Wallace (who was absolutely colossal, incidentally), it was evident the promise was
translating over to delivery.
This site said, and I quote:
“The only glitch is that slow starting
– but even that is showing signs of getting better. Versus Hibs it took 30
minutes to start to click, and strictly speaking Tavernier’s brilliant
equaliser. Then v Peterhead it more or less clicked from the start, but the
home side just could not finish. The
hope is when St Mirren come to Govan on Friday, that will progress further to
managing a goal or two which will confirm superiority, rather than just
possession and shots.”
It did. Finally those fast starts
are being rewarded with what they deserve – goals. Yes, St Mirren got one back
quickly thanks to a defensive lapse, and yes they really should have equalised
when Tavernier clumsily felled McMullan in the box. Captain Steven Thompson’s
penalty was something beyond abysmal.
But when Dean Shiels put the
third away late on, it was a more accurate reflection of Rangers’ vast
superiority over the 90 minutes. 63% home possession sums that up, along with 25
shots, 10 of which were on target.
Rangers dominated this match, and
fully deserved their victory – the quality of play was frankly outstanding, and
that off-ball running, pressing, one-twos, individual skill and overall unity
appears to be growing with every match. It is easily the best quality of play
Rangers have performed since the days of the Little General, with compression in
midfield, marauding wingplay, threaded defence-splitting passes and shot after
shot.
Yes, there was a bit of a lull
after Howieson made it 2-1, and Rangers did rather fail to rediscover the
overall rhythm as fluidly as before, but St Mirren, those two chances aside,
just were not in this match and the Ibrox men were frankly comfortable.
If this is only going to get
better, Rangers fans are in for a treat this season.