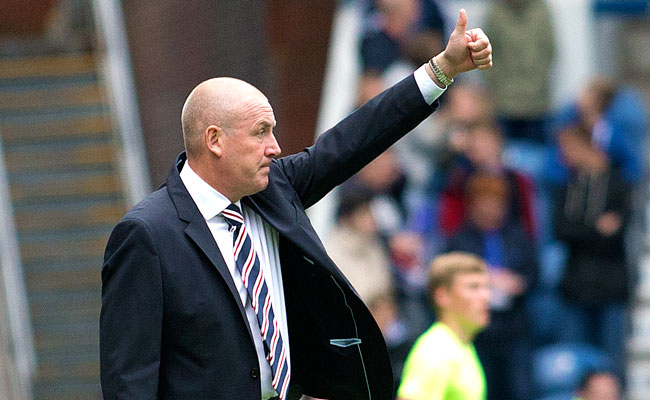 Two competitive matches into the
fledgling Mark Warburton era and it is clear that the progress being made over
the previous regimes goes something beyond expansive.
Nine goals scored, just the two
conceded (a silly penalty and a goalkeeping error) and delivered with a style
of energy and enthusiasm frankly alien to Rangers supporters sadly used to such
utter dross in previous years.
Yes, Hibernian are not Real
Madrid and no one pretends Peterhead are Chelsea
either, but it is plain to see this is simply a different Rangers animal to the
failure of recent seasons.
That Rangers fans are now feeling
genuine optimistic about the future under their new boss is a novel state of
affairs, and that plaque in the home dressing room at Ibrox really sums up the
connection between the new regime and the supporters:
“Send them home happy”
Warburton is demanding the fans
are satisfied with performances and results, and ordered that epigram installed
and read each match so each player will see what their duty is. So that each
player will understand what their
duty is.
And the performances on the pitch
are reflecting this. Yes, it took Rangers around 30 minutes to get going at
Easter Road, and yes, it took longer than it should have to finally breach
Peterhead’s rearguard, but the fact is the endeavour, tactics, shape and
link-up play are unlike anything we have witnessed pretty much since Walter
Smith retired.
Even the SPL Rangers McCoist
managed before Naismith’s injury relied mostly on the now-Everton forward’s
endeavour supporting star striker Nikica Jelavic. The standard of player was
overall higher than present, of course, but it would be untrue to say the general
work ethic even compared.
Now we are enjoying off-ball
running like never before, intricate one-twos in midfield and interchanging on
the flanks, defensive shape holding its position and reading the game properly,
and some really worldly goals.
Warburton puts it thus:
“That’s what we have to do. We must ensure
the supporters enjoy their football and how the team play.”
It just feels and looks like a
massive upgrade – the players are unified as part of a machine which knows what
it is doing – it will have the odd breakage, and the occasional cog will fly
out of kilter with the rest, but the overall machine will keep running, managed
by a most able technician in Mark Warburton.
That Rangers’ hierarchy managed
to get this guy to come north of the border to the Scottish Championship is
truly staggering. I am not claiming he is Jose Mourinho or Guus Hiddink, but he
is truly better than this league deserves, and Rangers are terribly fortunate
to have secured him.
The only glitch is that slow
starting – but even that is showing signs of getting better. Versus Hibs it
took 30 minutes to start to click, and strictly speaking Tavernier’s brilliant
equaliser. Then v Peterhead it more or less clicked from the start, but the
home side just could not finish.
The hope is when St Mirren come
to Govan on Friday, that will progress further to managing a goal or two which
will confirm superiority, rather than just possession and shots.
Manage that, manage another
impressive win to make it three in a row and it is pretty certain that
Warburton’s impact is not just a short burst.
And he is sending us all home
happy.